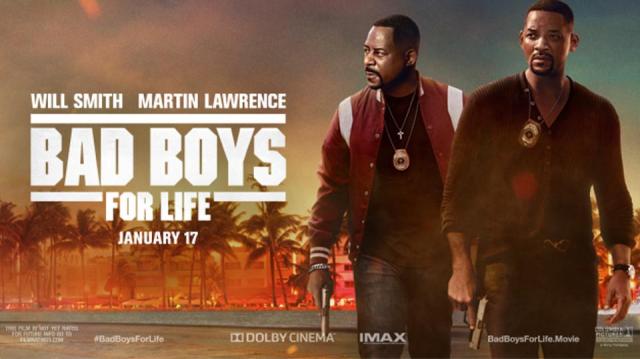 It’s been 17 years since Bad Boys II. Our heroes Mike Lowrey (Will Smith) and Marcus Burnett (Martin Lawrence) are still detectives in Miami, when a dangerous woman named Isabel (Kate del Castillo) escapes from prison and triggers a series of events that puts our leads in mortal danger. Captain Howard (Joe Pantoliano) has launched a new division of Miami PD called A.M.M.O. that must work with our heroes, including Vanessa Hudgens, Alexander Ludwig (Vikings), Charles Melton (Riverdale), and Paola Nunez.

I was worried. I was thinking this would be another Dumb and Dumber To sort of thing, where the original cast finally come back for strictly a payday. Let me reassure you, this is not that.

What we get here is actually something really interesting. The typical Michael Bay-isms of the franchise have given way, with new directors Adil El Arbi and Bilall Fallah taking the helm. These guys have a fresh new perspective, with this being their first Hollywood film. The movie felt more like a John Wick than it does a Bad Boys.

Let’s talk about Will Smith and Martin Lawrence. They’re both perfect here, resembling the machismo characters they played 17 years ago but with a lot more depth. Martin Lawrence is funnier here than I ever remember him being, I was laughing nonstop. And Will Smith gets plenty of moments, both emotionally deep moments and some incredible action sequences. His recent movies have been tumultuous, with the relatively unseen Gemini Man and Spies in Disguise, so this is a good move for him.

And when I say this movie feels like a John Wick, let me explain what that means. This movie is vibrant and colorful and has some incredibly striking locations. The action is intense and surprisingly innovative, with some killer hand-to-hand fight sequences, some massive shootouts, and several intense helicopter battles. The action had me on the edge of my seat and delivered quite a few moments that struck me as unique and new.

While there is a lot going for it, there’s also some amateur mistakes made along the way that keep this movie from absolutely nailing it.

Most of these mistakes would have been easy fixes, if someone would have noticed. For example, some of our characters wear the same clothes even though days and even weeks might have passed. We meet the A.M.M.O. team and then we see a montage of the bad guys doing stuff, then we cut back to A.M.M.O. and they’re wearing the same clothes but now reacting to this series of events.

Likewise, we have an incident that triggers a ‘six months later’ title to pop up, yet the story has not progressed for our team of detectives, they’ve made no progress on things that, in logical sense, they should have probably figured out by now.

These are minor qualms but things that stick out once you notice them.

You can breathe a sigh of relief. Bad Boys for Life is a really good time, with plenty of laughs and surprisingly refreshing action sequences. It’s got some twists and turns you won’t see coming and some hiccups resulting from amateur filmmakers, but ultimately this is a fun ride that you won’t regret seeing on the big screen.