It’s a little weird that nearly two months before Christmas, we get a Christmas-themed romantic comedy. I took it as a sign that there wasn’t a lot of confidence in this movie, to be able to compete in the December window. Well… let’s see if I was right.

Kate (Emilia Clarke) has had a rough go lately, drinking to excess and failing to create (or sustain) meaningful relationships, burning every bridge. Her immigrant parents (Emma Thompson and Boris Isakovic) are at odds, while her sister Marta (Lydia Leonard) feels like she can’t do anything to win their parents’ love. Kate works at a Christmas shop in London, ran by a woman who calls herself Santa (Michelle Yeoh).

Things aren’t looking great, until Kate runs into the mysterious Tom (Henry Golding), who starts to put her on the right track.

The film is co-written by Emma Thompson and directed by Paul Feig (Spy, Bridesmaids, The Heat, and many many episodes of television). 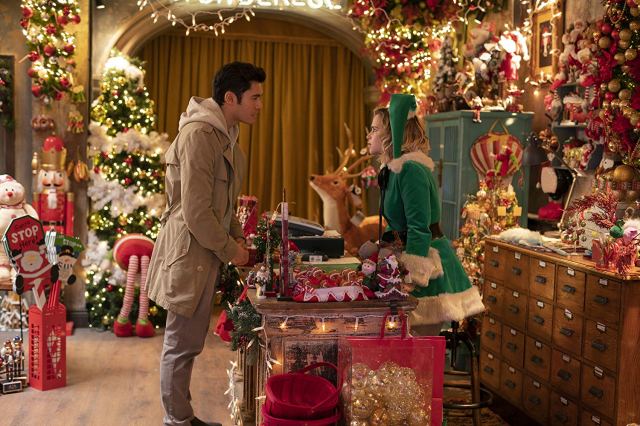 The biggest surprise here is that this movie is so much more than you’d imagine. It’s not really a romantic comedy, it’s actually a surprisingly deep look at this woman’s downward spiral and how to rebuild bridges; romance has very little to do with it. Emilia Clarke’s performance is great, especially after you come to grips with the fact that she isn’t meant to be the quirky lead looking for love, but she’s a broken and tragic character trying to find a way to be happy again. Henry Golding is also pretty fantastic, though the mystery of why he’s so mysterious can be predicted pretty early on.

The surprise comedic moments come from Emma Thompson, which I can’t say I’ve really seen before. She’s quick and every punchline hits, probably due to the fact that she cowrote the script. There’s not a weak link in this cast, everyone pulls their weight.

I wish I could really tell you why this is an interesting and surprising movie, but to do so would really spoil the plot, so trust me. This is much more than the romantic comedy you’re expecting.

There is a bit of mystery here and unfortunately it’s pretty predictable, as you start to guess what’s going on. It doesn’t lessen the impact of what happens but some folks might think the journey there is a little formulaic.

Last Christmas is a surprisingly good time, with some twists and turns that you wouldn’t expect. Everyone delivers top notch performances, with a comedic turn from Emma Thompson that delivered a few big laughs. Don’t look up spoilers, but head to the theaters if you’re looking for a story of redemption in the disguise of a holiday comedy.