It’s been about 18 years since Terminator 2: Judgement Day. In that time, we’ve gotten new Terminator films but nothing really felt like a true sequel to that film. Well, here we are, with a true sequel that can cap the Sarah Connor trilogy.

Two warriors from out of time arrive in current day. One is a woman named Grace (Mackenzie Davis), who is an augmented human from the future, sent back in time to find and protect a woman named Dani (Natalia Reyes) for some yet unknown reason. The other time traveler is a liquid metal killing machine called the Rev-9 (Gabriel Luna) who will stop at nothing to kill Dani and change the future.

Well, there’s no one better at fighting off Terminators than Sarah Connor (Linda Hamilton), who arrives and teaches both Dani and Grace some tricks to elude the killing machines. Throughout their journey, they also encounter an older version of a Terminator, a T-800 (Arnold Schwarzenegger) who is living among the humans of today.

This film is directed by Tim Miller (Deadpool).

This movie is surprisingly good, capitalizing on the hype of a true T2 sequel but also delivering some great and unique moments. For nostalgia, both Hamilton and Schwarzenneger deliver, recapturing what made their characters memorable and living up to what we’d expect. The newcomers also do an outstanding job, most notably both Mackenzie Davis and Natalia Reyes. This action movie is carried by three amazing and badass women, something fairly unique. Davis has some action sequences that are jaw-dropping.

In terms of story, this also carries on the plot of T2 but also has some twists and turns of its own. I was expecting a few things to happen but was pleased when they subverted those expectations. It manages to have plenty of action, some great heartfelt moments, and just enough comedy. It’s a perfect blend. There’s also a chance this could be starting a new franchise of Terminator films and I’d be totally onboard.

Let’s talk action. The action sequences are intense and unique, especially a car chase towards the beginning of the film. It takes a lot to kill this liquid metal Rev-9 and you can tell the crew had a blast trying to figure out how to smash and obliterate him over and over. Gabriel Luna doesn’t do much and doesn’t carry the same gravitas as Robert Patrick as the T-1000, but he still does a fine job in these action moments. 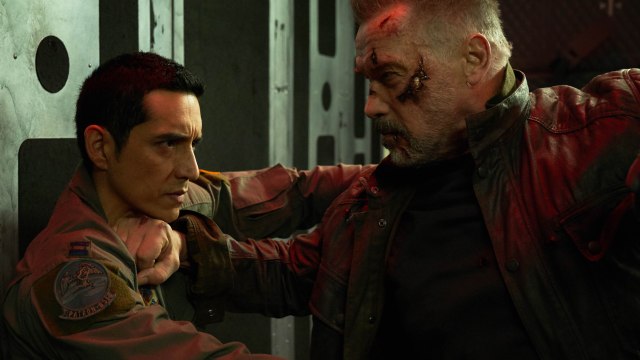 The movie’s only weak link for me was the visual effects. Most of the time, it was great, including some great chase sequences, plenty of cool liquid metal effects, and lots of man vs. machine fight scenes, but it didn’t always look so polished. There’s a sequence in an airplane towards the film’s climax that looked corny, as the characters fought in this falling airplane. There are plenty of other moments where leaps and jumps and lots of other feats of athleticism look quite fake in execution, really taking you out of those moments.

This is a great movie, though not perfect. The visuals can’t always match the movie’s ambition, but it’s grounded by stellar performances from our female leads. The action is great, the story throws you for a loop, and this truly ends the Terminator trilogy in a cool way. Will there be sequels? Likely yes. And I’m stoked for them.