Godzilla: King of the Monsters.

I always had a soft spot for Godzilla films but I’m definitely not a hardcore fan. Only recently did I really dive into the history as I created this video on Godzilla’s earliest foes.

So I was pretty excited as this film neared. I enjoyed the 2014 Godzilla film, though I agreed with most viewers that it kept Godzilla hidden for too much of the film’s runtime. I also enjoyed Kong: Skull Island. So I went into this movie hoping that this could really catapult these kaiju films into a new era.

That’s a lot of human characters, which might tip you off that these beastly battles don’t really take as much screentime as you might hope. 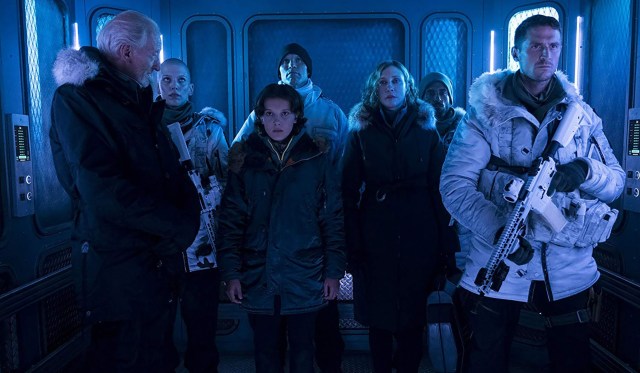 There are some jaw-dropping moments here, as behemoths clash in major metropolitan areas. Really, it’s the big four that get the most time, including Godzilla, Ghidorah the three-headed dragon, Rodan the ancient pteradon, and Mothra, the benevolent moth. Their battles are epic, though to be frank… they’re not as epic as I hoped for. It’s still very cool to watch, but I left feeling a tad disappointed. Actually, an equivalent might be how I felt after watching the first Pacific Rim. Such an incredible premise and so much potential, yet it felt wasted.

For the human cast, it’s a very mixed bag. I don’t blame anyone’s performance but the writing is a bit forced and full of exposition. Millie Bobby Brown is the most realistic character, though even she can somehow run faster than giant monsters can. If you’re looking for realism, this isn’t the place.

You know what this is the place for? Cool single shots, like wallpaper for your computer. Single moments that look astounding, bringing these monsters to life. The actual fights might disappoint but some of these freeze frames are absolutely gorgeous.

I wanted to love this film but the giant monster battles disappointed me in a few key ways. Firstly, they’re surprisingly rare. Our human characters get most of the screentime and it’s painfully dull. When the monsters do arrive, the battles are full of quick cuts and blurry action. The one big fight sequence in the 2014 Godzilla was better than almost everything in this film, which is unfortunate. It becomes difficult to track what’s happening when Rodan and Mothra are flying through Ghidorah’s massive lightning storm, while Godzilla shoots atomic breath. It’s all a blur of colors and explosions. So the fights are rare and they’re not great quality either.

Now, there are cool moments, but most of these moments are showcased in the trailers, absolutely showing you the moments that would have left you speechless if the marketing team had withheld them for the film. The best moments were spoiled and everything else we see is not nearly as cool as those moments.

Also, the trailer (and the opening of the film itself) give us teases of other monsters, 17 in total. But let me temper your expectations, this film is really about the big four. The trailer sequences featuring other monsters is literally all we see of them in the film (and I think they might actually have longer shots in the trailer than the film itself). So don’t go into this film waiting for a surprise contender to face off against Godzilla, it doesn’t happen. We see a few new monsters that weren’t in the trailers, but again, it’s minimal and a bit underwhelming.

Real quick, let me tell you about the human characters. There’s a lot of them and they take up way too much real estate in this film. Our two leads Kyle Chandler and Vera Farmiga are painful to watch, as the writing has them somehow able to do everything that’s possible. Chandler’s character is somehow a scientist, military strategist, and helicopter technician. You also question the motivation of some of our characters, making the plot unnecessarily convoluted. This movie could have been simple, yet it’s been muddled and complicated by these human stories.

I’ve seen a lot of people praising this film for getting the monster battles right but I think I might have expected too much. I found the battles to be too rare, shot too shakily, and the best moments were usually showcased in the trailers. When monsters aren’t clashing, we’re left with humans that aren’t empathetic or relateable and ultimately shouldn’t be taking up this much space. Is this movie cool? Yes. Cool as it could’ve been? Not by a long shot.