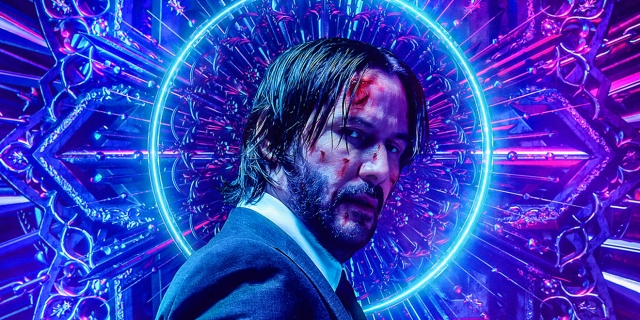 It’s surprising to me how many people have ignored this franchise or somehow just not given it a chance. The first and second films are undoubtedly some of the best action films in the last 10 years so if you’re sleeping on this series, now is the time to rent those films and give it a chance.

The thought was that Parabellum was to be the final film in one of the best trilogies in action history, so the expectations were high. Can this cap off a truly incredible series?

John Wick (Keanu Reeves) was a retired assassin, living peacefully, until he was roped back into the life (in the events of the first movie). He’s one of the best martial artists and skilled assassins in the world, though ends up at odds against the criminal underworld’s government, called the High Table. At the finale of movie number two, a bounty is placed on John’s head for $14 million so every other assassin and mercenary in the world is aiming for him.

As this movie opens, the clock is ticking down til the alert goes out that the bounty is live, so he has just minutes until the world turns against him. Just as he’s seeking refuge and weapons, we also follow what’s called an Adjudicator (Asia Kate Dillon) as she retraces Wick’s steps from the last movie and clean up his mess, often with violence. Former allies of Wick’s include Winston, the runner of the Continental Hotel (Ian McShane), and the Bowery King, a man who uses the homeless of New York to traffic weapons and knowledge (Lawrence Fishburne).

When the clock starts and John Wick must defend himself, he seeks out an old ally (Halle Berry) who also has an affinity for dogs and might be able to help him. The most dangerous assassin to look for Wick is Zero (Mark Dacascos), acting on behalf of the Adjudicator. 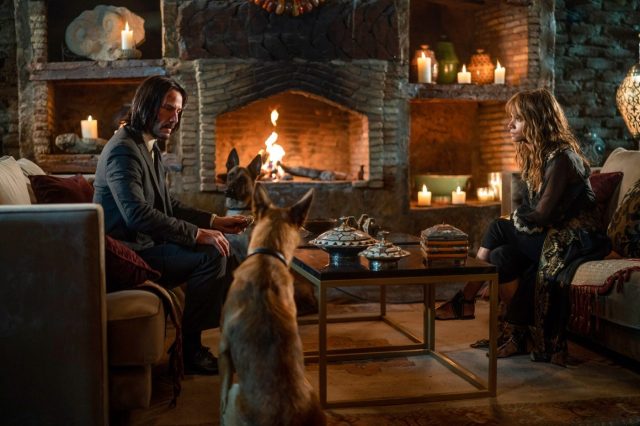 If you’re looking to this movie to continue its tradition of absolutely mind-blowing action sequences, you won’t be disappointed, as this film again gives you fight after fight that each feel unique and do things that you’ve likely never seen in action movies before. We’ve got fights on horseback, we’ve got a group of ninjas on motorcycles, we’ve got deadly dogs that steal the show, and we’ve got knife fights that are absolutely jaw-dropping. Whether guns, knives, or bare fists, each fight is creative, full of long takes that let you really take in the action, and generally deliver some of the best action in Hollywood.

The world of John Wick is also incredibly alive here, as we learn more and more about this criminal underground. We learn just enough to be satiated but we’re still eager to find out more. The world also comes to life beautifully, often through bright and vivid colors. The movie is neon and bold and looks absolutely wonderful.

Keanu again wows in this role, giving us a battered and broken man who still manages to defeat all odds. Halle Berry is also perfect here, though really only appears in the middle of the film. Also, a shoutout to villain Zero played by Mark Dacascos. I only knew him as the Chairman from Iron Chef America but surprise, he’s actually an incredibly gifted martial artist and I had no idea. He’s also really funny here, which was a nice change of pace.

This isn’t a detractor but more like a warning, if you’ve somehow not seen the other films. These films are brutal and violent (there’s like 300 people killed in this movie) and some of these deaths are intense, so if you’re squeamish or triggered by knife/gun violence, this won’t be a good pick for you.

The only other qualm I have is really something I should be thankful for. This film should have been the cap to an amazing trilogy but it doesn’t end here, our climax leads into another cliffhanger, meaning we’re going to see even more John Wick in the future. I think if you go in knowing that this isn’t just a trilogy but rather a full-on franchise, you might appreciate the climax a little more.

These films are revolutionizing action films as we know them. The martial arts on display are top-notch and the world is vibrant. It’s nonstop action and it’s action unlike anything we’ve ever seen. There are some character moments that really let Keanu shine but the star of the film are the brutal and intense fight sequences. If you have the stomach for it, John Wick: Chapter 3 is the best there is in this genre.