The DC Comics movie franchise (known as the DC Extended Universe) has had a rocky go of things. I’d argue that they’ve had successes (Aquaman and Wonder Woman mostly) and have had some drastic missteps (I would say Suicide Squad and Justice League). Shazam! luckily seems to avoiding the pre-established continuity and kind of going out on its own, aside from a few nods and references. Is it able to make a favorable impression?

We meet Billy Batson (Asher Angel), a foster kid who keeps running away and trying to find his birth mother. He ends up encountering an ancient wizard named Shazam (Djimon Hounsou) who imbues him with the powers of six ancient Greek gods (transforming into an adult superhero, played by Zachary Levi). However, there’s a villain named Sivana (Mark Strong) who can harness the deadly sins that must defeat this new Shazam before he can then rule the world.

Along for the ride, we have fellow foster children played by Jack Dylan Grazer, Grace Fulton, Faithe Herman (This is Us), Ian Chen (Fresh Off the Boat), and Jovan Armand. 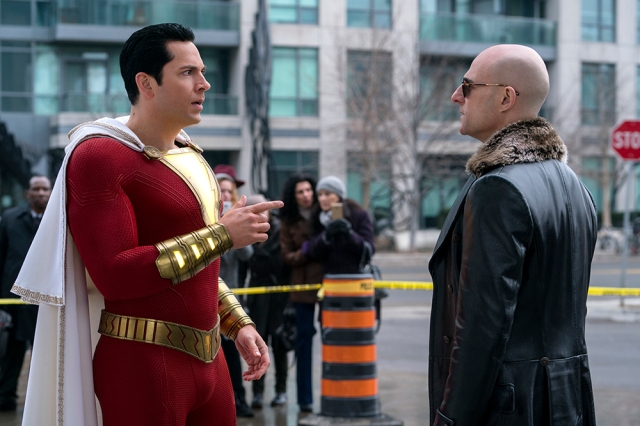 This is undeniably my favorite film in the modern run of DC films. It manages to succeed in areas that other standout DC films also have, but not suffer the same weaknesses.

The foundation of this film are the characters (and the actors playing them). Zachary Levi got a lot of flack when it was released that he’d be playing this character but he absolutely nails it, full of childish wonder and glee. This is a very light movie, full of humor and heart, and he carries most of that weight. The two young leads of Asher Angel and Jack Dylan Grazer also do a fantastic job here.

Some people throw out the term “superhero fatigue” and claim that movies like this won’t work and will eventually start drawing smaller crowds. Shazam! works because of our fatigue, it relies on our knowledge of superhero tropes and our expectations. As Billy is learning to be a superhero, he has a wealth of knowledge already about characters like Superman and Batman, just like we do. It’s almost a satire of the genre, while leaning full into it. It goes to places in the Shazam-mythology that I definitely did not expect (prompting this spoiler-filled explanation of the film’s mid-credits scene).

The effects are generally great, even the completely CGI monsters that appear throughout. Both Wonder Woman and Aquaman struggled with their entirely CGI characters, this movie rectified most of these mistakes. The fights are fun and creative, making even familiar powers feel fresh and exciting again.

My only minor gripe is about Mark Strong’s villain, Dr. Sivana. He has a great intro and initial motivation, but as the movie goes on, he veers into typical villain mode and I lost track of what he actually wanted, other than being tempted by the deadly sins he controls. It’s not always clear, but this villain is still leagues above and beyond other DC villains so far.

I don’t know how to say this other than I had a smile on my face for the entire runtime of this film. It’s fresh and unique and vibrant, yet still delivers some heartfelt and emotional moments. Mark Strong’s villain isn’t always clear in his motivation, but he’s a perfect foil to Zachary Levi’s Shazam. This will stand out as one of the best DC Comics films yet, if not a clear frontrunner for most of you. In a genre as packed as the superhero genre has become, this one stands out as being one of the best in a long time.