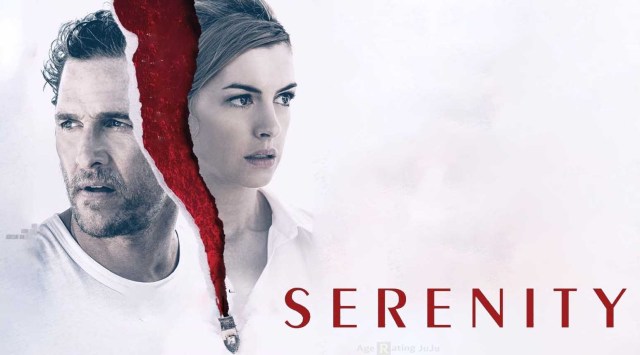 Now, this is going to be an incredibly difficult film to review, so unfortunately it might appear really vague because this whole movie’s premise is something that the marketing and trailers hide from you, so I need to move forward with caution.

Here’s what the trailers show us. A woman named Karen (Anne Hathaway) wants her husband (Jason Clarke) dead, so she tries to pay a down-on-his-luck fisherman named Baker (Matthew McConaughey) to take him out fishing and kill him at sea. So the trailer wants you to believe that this is a suspense thriller, full of deceit and betrayal. What we get is something quite different. Without spoiling the twist, you find out very early on that this movie is something else, that this is a high-concept science-fiction movie and that nothing is as it seems.

We also get Djimon Hounsou as Baker’s first mate, Jeremy Strong as a mysterious salesman trying to find Baker, and Diane Lane as a woman who helps pay for Baker’s fishing expeditions in exchange for sex.

Even though this is a bonkers story, Matthew McConaughey still delivers an incredible, although unhinged, performance. If this were a realistic tale of a man and this impossible choice to kill or not, he’d likely be up for awards right now. But the film around him goes off the rails quickly and even his performance can’t salvage it.

Likewise, Jason Clarke delivers an exceptionally evil performance as well, convincing the audience that maybe the world would be a better place without him, making us question which choice is the right one.

This movie reminded me of how I felt while watching Interstellar (though I think more people will like that film). We don’t get a big twist moment, instead we get an entire movie that slowly unravels what’s happening. From the first few minutes, we get clues that this movie is a science-fiction film. And I think that was a poor decision. If this film had been a legit thriller and then gave us a twist in the final moments, maybe I would’ve been on-board. Instead, we get reminders every few minutes that something is wrong, and so you start to analyze and pick it apart and I think it’s harder to appreciate some of these great performances when the plot is making you frustrated.

And once we get the answers we want, there’s still a lot of film left. It raises more questions, questions that aren’t ever answered. It’s a frustrating film to watch, because you’re confused for most of it and then disappointed once you DO get the answers you’ve been waiting for. I don’t think the twist is inherently bad, but it’s definitely poorly executed.

This is such a weird film but I don’t think it’ll be remembered fondly or even be divisive (like Interstellar was). I think this movie tried to market itself as a grounded suspense thriller and then trick the audiences once the movie started, but most folks will be disappointed with how the big trick plays out. There’s a few solid performances but the movie itself falls apart.