Releasing in late December, it’s clear that this movie wanted to capitalize on timing and hope for award consideration. Steve Carell impressed people with serious films like Foxcatcher and it looks like this was meant to be his followup and maybe his big Oscar win. However, I can assuredly say that’s out of the question.

Mark Hogencamp (Carell) was attacked viciously by a group of men and was nearly killed. Instead, all of his prior memories were lost and he now tries to cope with life moving forward using dolls. These dolls represent people in his life, most notably the women in his life, and he stages them and take photographs in this small town he’s created, the fictional town of Marwen in Belgium, set during World War II. Some of these women include his physical therapist (Janelle Monae), his coworker (Eiza Gonzalez), the woman who works at the hobby shop (Merritt Wever), and his caretaker who buys groceries and medication (Gwendoline Christie). A new woman moves into town (Nicol, played by Leslie Mann) and Mark starts to incorporate Nicol into his scenes.

The movie bounces back and forth between his real life, including the proceedings revolving around his attack, and then the fictional world of Marwen, which often allow him to confront people and problems that he can’t in real life.

This film is directed by Robert Zemeckis, famous for films like Forrest Gump, The Polar Express, Cast Away, and all three Back to the Future films.

This is based on a true story, which is usually very compelling. The idea of a man coping with tragedy through staged photographs is certainly ripe for a movie. As a trailer, I was really hopeful that this would be a hard-hitting and emotional film. We didn’t get that.

The talent here also tried their best, though some of them get very little to do. Leslie Mann and Merritt Wever get the most to do and both of them do a decent job. 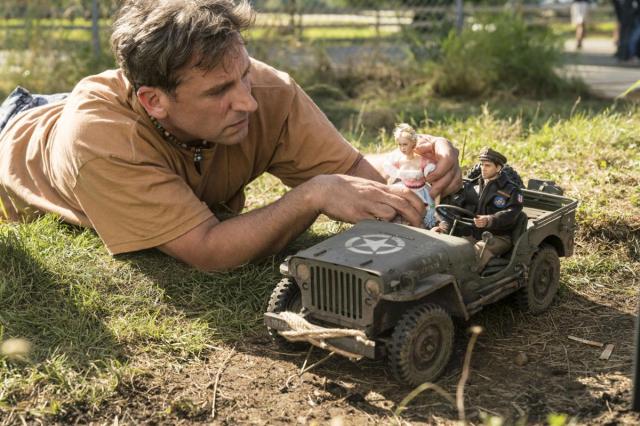 Unfortunately this movie falls apart. It starts in the script, with some of these women only having one scene where they appear as real actresses, which is a shame. Instead of focusing on the real world, nearly half the movie is animated, the adventures of these figures. And this world is far less interesting than the real world, surprisingly.

The dialogue is incredibly corny and heavy-handed. The editing is awkward and there are many long pauses between lines that don’t have any sort of effect. A lot of these problems are amateur, that a distinguished director like Zemeckis should have caught at some point before the film released.

And then we have the emotional core of the movie revolving around Mark and this tragedy. This all falls incredibly flat, almost like a parody of what this movie was supposed to be. It tries to tackle pill addiction in a way that is laughable, it has Carell delivering ridiculously over the top antics, failing to really deliver on what the trailers promised.

Welcome to Marwen is an interesting idea and that’s really all it has going for it. A few of the leads try their best, but ultimately this film is let down by a flimsy script, corny dialogue, and it mishandles serious tragedy and instead delivers something laughable. If you’re curious, wait until it’s on DVD, but I wouldn’t encourage this film even then.