The history of the DC Comics Extended Universe is a rocky one. We’ve got highs like Wonder Woman and lows like Suicide Squad. Both Batman v Superman and Justice League were incredibly divisive, so folks are really hoping that Aquaman can be another success and show that this franchise has hope.

Arthur Curry (Jason Momoa) has a complicated background, as he’s the son of lighthouse keeper (Temuera Morrison) and the Queen of Atlantis (Nicole Kidman). He has very little knowledge or contact with his underwater roots until he’s older, when he’s recruited by a woman named Mera (Amber Heard) to help stop Arthur’s half-brother Orm (Patrick Wilson) from uniting the seven armies of the sea in a war against the people of the land. Orm is advised by the man who trained Arthur, named Vulko (Willem Dafoe), and assisted by a dangerous pirate codenamed Manta (Yahya Abdul-Mateen II).

Luckily, this movie is a breath of fresh air. This is a truly otherworldly experience, full of excellent world-building moments. Let’s start with the visuals, which aren’t always exceptional but are always interesting. Some huge moments feel a little video-gamey but it’s always enthralling to watch and full of details. I went into this movie wanting epic fights and tons of underwater monsters and I left feeling completely satisfied. The huge climax is incredibly entertaining, leaning hard into the ridiculousness of this whole scenario.

That connects to the next point. This movie knows that it’s ridiculous. We get slow motion shots of Momoa walking through mist for no reason. We get fight sequences that are physically impossible, but the movie knows that and revels in it. The director James Wan has done big action before, most notably Furious 7. This movie is a nonstop montage of “Whoa that’s cool” moments and it totally works.

Is it plausible or realistic? No. Is it fun? Absolutely.

When I rank movies, remember that I compare them to movies in their genre. So this movie’s score is ranked against other action-heavy, corny-dialogue films just like this.

So let’s talk about Momoa. Jason Momoa is by no means a good actor. In this film, with this tone, he doesn’t need to be. He delivers one-liners and does crazy cool things, while also walking around without a shirt on. He does exactly what this movie needs him to do. 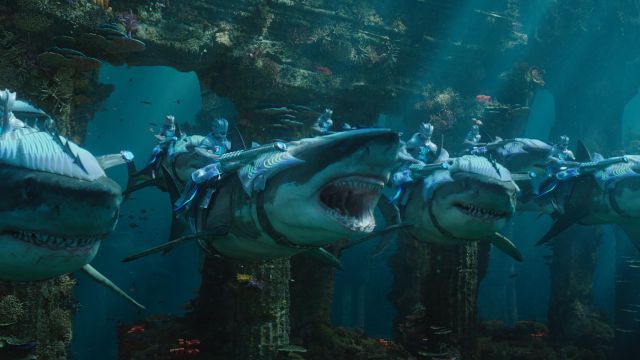 The visual effects aren’t always stellar, but considering the sheer quantity of effects shot, it’s rare when it doesn’t work.

I also question the use of the villain Manta (or Black Manta in the comics). The actor isn’t bad, the origin story isn’t bad… He just doesn’t quite fit. He’s a henchman, a goon. And when he shows up to try to kill Aquaman, it derails the main storyline. I almost would’ve preferred if we met Manta as a henchman and the movie ended with him deciding to kill Aquaman (which essentially where his arc in this film begins). Think of how they did Crossbones in Captain America: The Winter Soldier. This guy will someday become Black Manta, and lead into a sequel. He deserved more than this and he actually might’ve detracted from the main story.

Aquaman is a nice change for the DC films, as it’s actually bright and colorful and embraces its quirky comic book nature. Momoa isn’t a stellar actor but he relishes every moment on-screen here and gives us an Aquaman that you can root for. The story is a tad predictable for an origin story and Manta derails the main story a bit, but the massive battles, interesting creature design, and impressive fight sequences make this is an overall really enjoyable time.