Here is a major preface for my review here. Surprisingly, I’ve never seen the original Mary Poppins (gasp) so this review is based on my experience with this movie alone. I have a general idea of the music, tone, and story of the original, but that’s pretty much it. So, if you disagree with my thoughts here, this may be the reason why.

When they were children, brother and sister Michael (Ben Whishaw) and Jane (Emily Mortimer) were visited by a magical nanny named Mary Poppins (Emily Blunt). Now, as they’re adults, the nanny returns in their time of need. This time, it’s to help Michael’s three children (Pixie Davies, Nathanael Saleh, and Joel Dawson) as they try to cope with the loss of their mother and the potential loss of their home due to a greedy banker (Colin Firth). A local lamp-lighter named Jack (Lin-Manuel Miranda) helps them in their adventure.

Visually, this is a very interesting movie. They blend animation styles in a way that is very reminiscent of older films. They’ll jump into a cartoon or do a choreographed number underwater, for example. It’s all very outlandish but it looks incredible. It’s colorful and vibrant and intriguing to look at.

The dance choreography will also keep you enthralled, especially some of the larger numbers. One, featuring a massive group of lamp-lighters spearheaded by Lin-Manuel Miranda’s character, is extraordinary, as they speed around bicycles and do tricks. Not to cut to the negatives here, but I just wish the actual songs to complement this choreography were a little more solid.

Everyone is also talking about Emily Blunt. She does a fine job but there’s not really much to the Mary Poppins character, from what I can gather. She’s this ethereal force that sweeps in to solve their problems, but she doesn’t really have her own motivation or arc or growth. She moves the plot forward and luckily Blunt has that certain je ne sais quoi that makes her feel like this otherwordly figure.

Now, again… I’m coming at this movie from a very different place. I may not know what moments were homages to the original. I may be missing pieces of info that would help me appreciate this film.

To me, I found the movie fairly boring, and that’s a shame. It looks beautiful but it’s paced like a turtle. There are many songs throughout the movie but 75% of them are slow and halt the movie completely. I wouldn’t mind if they were powerful ballads but instead, they’re unmemorable. They serve very little purpose, are not entertaining to watch, and will have you checking the time. Now, maybe the original film had a similar problem, but that doesn’t excuse it today.

I also didn’t find much of the movie to be emotionally impactful either. It centers on Michael (Whishaw) and his connection to his children, but there was never an emotional payoff. The few scenes that tried to elicit emotion felt a little underwhelming.

So, when the movie lacks emotional impact, doesn’t feature any memorable music, and seems boring for most of its runtime, it’s not a great sign. Maybe if I did have knowledge of the original, it might change things slightly, but most of these problems would likely still exist. 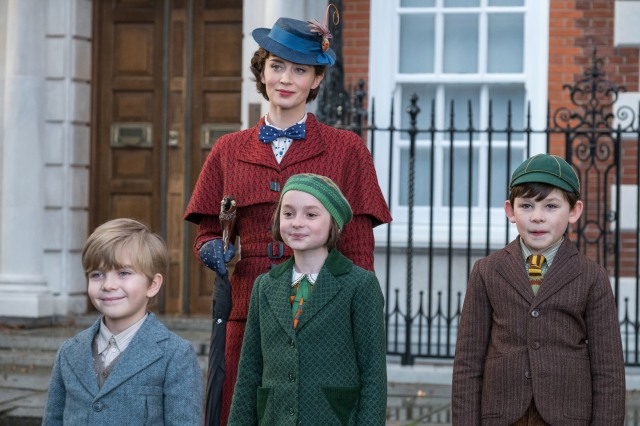 I feel like I’m going to get some hate for this. This movie feels like it’s a classic film, sure, but those methods of making movies in the 60s don’t still work today. The animation and effects are incredible and Emily Blunt serves as a perfectly supernatural Mary Poppins, but unfortunately the music misses the mark completely and the pacing of the movie slows to a snail’s pace. Fans of the original might find more to appreciate here, but I question if this movie needed to be made because it doesn’t seem to add anything new or do anything better than what I’ve heard about the original.