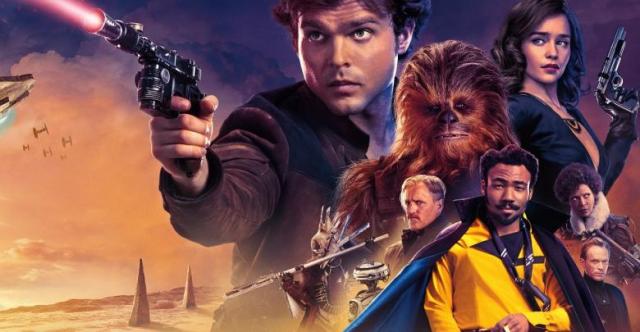 It’s weird to say how little I was excited for this movie. And I’m not the only one, as I watched the movie opening night with ~20 other people in a mostly empty theater. Is it Star Wars fatigue or just a bad-looking movie? Will the movie manage to surprise us? Let’s get to it!

We follow a young Han Solo (Alden Ehrenreich) as he becomes the smuggler that we know and love. He manages to escape his homeworld but has to leave the love of his life behind (Emilia Clarke). Needing to raise money to return to her, Han teams up with Beckett (Woody Harrelson) to pull off some dangerous jobs for the criminal warlord Dryden Vos (Paul Bettany). Along the way, Han meets the wookie Chewbacca (Joonas Suotamo) and the flamboyant gambler Lando (Donald Glover). We also have Thandie Newton and the voices of Jon Favreau and Phoebe Waller-Bridge.

As a Star Wars adventure, there’s plenty of otherworldly adventure to be had here, including some really cool new alien designs, new supporting characters that are interesting, and some fun little explanations that fill in the gaps in the original trilogy. I found the new aliens especially interesting, with plenty of cool practical effects.

Some of the characters get treated better than others. Lando (Donald Glover) stole every scene he was in, complemented by his droid L3-37. It’s no surprise that they’ve already announced that a sequel for Lando is in progress.

Lastly, on a very basic level, most of you should have a good time here. There’s plenty of action moments, a few twists and turns, and plenty of typical Star Wars moments to soak up. If you expect very little, this movie might please you.

This is a movie that you shouldn’t be too critical about, because you can enjoy it if you just don’t think about it too much. Unfortunately my job is to be critical.

While there’s action, it’s spaced out pretty far apart, and there are huge sections of the movie that are pretty boring. Most of this stems from Han Solo (Alden Ehrenreich) being the most boring person in the ensemble. He lacks the natural charisma that Ford brought to the character, so I found myself completely disinterested in his well-being. It’s also hard to be excited about something that is ultimately predictable, since it’s a prequel. Characters that we’ve never seen, you can guess will either die or disappear. It’s the same problem we had with Rogue One.

It feels like there’s very little at stake. How can we be worried about Chewbacca, when we know everything turns out okay for him? What the film adds to the mythology is minimal, begging the question if this movie is even necessary, at all. The few times they try to do something substantial, one big reveal specifically, it felt out of left field.

Solo isn’t abrasively bad. It’s just unnecessary. The movie doesn’t contribute to the Star Wars mythology much and the story is ultimately bland and uneventful. There are some fun characters to follow but our lead isn’t one of them, so the entire movie feels like a drag and when it ends… you’ll wonder if this journey was one worth going on. I don’t think it was, but you probably won’t hate the film either. On the spectrum, I find myself at ‘apathetic’ in general about this.