Maybe this is the new Superbad for a new generation. But maybe that means I’ve outgrown this, maybe this story isn’t for me. I’m going to try to keep these things in mind as I review this movie.

Three high school girls (Geraldine Viswanathan, Kathryn Newton, and Gideon Adlon) all make a pact to have sex on their prom night. However, their parents find out and try to stop this at all costs (Leslie Mann, John Cena, and Ike Barinholtz). We also have minor roles for Gary Cole, Gina Gershon, Hannibal Buress, and Ramona Young (Santa Clarita Diet). 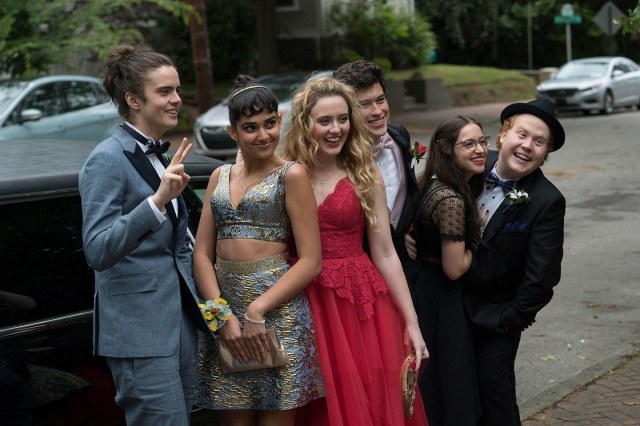 Like I said in the intro, for high school and maybe young college kids, this might be a defining movie for them. The story of these high schoolers didn’t really resonate with me, but I think it’s starting to be an age thing. You might love this.

The humor is solid, laughs come at you quick, usually due to an incredibly funny performance by Ike Barinholtz, while John Cena and Leslie Mann play more of the “straight man” characters. The humor is raunchy, usually relying on grossout moments combined with sex. If you love that sort of stuff, you’ll love this. But if you find typical gross R-rated comedy to be a little much for you, this movie won’t entertain you one bit.

I gave you two possible reasons already. You might be too old for this and find this crazy high school night a little hard to relate to, combined with incredibly gross humor. You know yourself. You’ll either fall into the category of “I can’t breathe, this is so funny” or “This is disgusting, I want this to end.”

Regardless of your attachment to the humor, I feel like this movie is lacking personality. This is a cast of unknown teens and B-list supporting actors, elevated to the headliners. John Cena is funny in Trainwreck and Leslie Mann has done well in the Judd Apatow films but they’re not headlining stars. Ike Barinholtz is the funniest one here and he’s meant to pop in and be crazy for a bit and then disappear, which has worked for him before. There’s no lead here, there’s no anchor. It feels like the movie is missing a vital piece.

Because of that, my score ends up falling at “middle of the road.” They do their best but their best is pretty average. These are jokes we’ve done, nothing is special. There’s not a lot of heart here and the unknown teen actors don’t really stand out in the way that the cast of Superbad did when that movie arrived on the scene.

This is fine but it’s all familiar territory. The adult characters are fine, with the standout being Ike Barinholtz. The kids fare a little less, with none of them really making any sort of memorable mark. The movie ultimately is missing a star and the personality that a big comedic name would have brought. It’s a fun time, especially if you’re into grossout raunchy humor, but overall pretty forgettable.