I wasn’t a big fan of the trailers for Ready Player One, with the effects looking unfinished and the pop culture references seeming forced. People were excited though, so I knew I had to give it a shot. And boy, am I glad I did.

We’re in the future, where we follow a teenager named Wade (Tye Sheridan) who spends most of his time in the OASIS, a simulated world where people can become anything their heart desires. Wade lives as his avatar Parzival and is trying to complete a riddle within the game, left behind by the creator of OASIS, James Halliday (Mark Rylance). The entire world is trying to figure out these riddles because the person who makes it to the end of the puzzle gets to become the owner of OASIS (which means becoming the richest person in the world). There are giant corporations also trying to gain control of the OASIS, including our major antagonist played by Ben Mendelsohn.

The movie is jam-packed with pop culture references, as Halliday was obsessed with 1980s movies, television, and games, but we also have avatars, vehicles, and weapons of every major franchise since then (up to to current day). 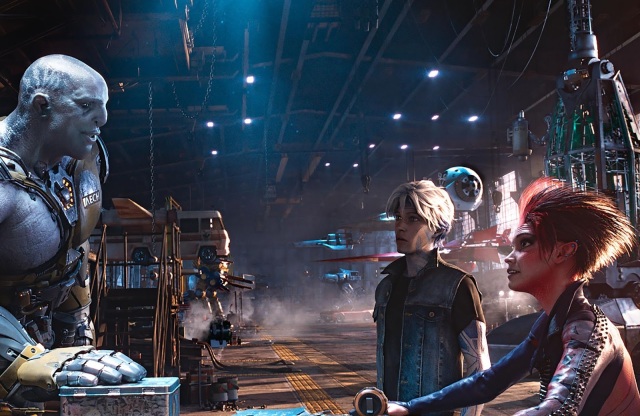 I had a grin on my face for the entire runtime of this film and I was absolutely blown away. The world is incredibly interesting and they manage to explain it to you simply and quickly, with the opening exposition narrated by our lead character. This movie is directed by Steven Spielberg and he does some great work here, able to tap into nostalgia but also deliver a clever mystery and interesting characters without using the pop culture references as a crutch. These characters care about the movies and videogames that pop up, so it makes sense why they’re there. These references are incredibly abundant and I can’t wait to see the movie a few more times to catch things I didn’t notice before.

Tye Sheridan is great as our lead. He’s convincing in his portrayal of a teenager who would rather spend his days in the OASIS as opposed to his real life. The other standout for me was Mark Rylance, who Spielberg has included in his other recent outings Bridge of Spies and The BFG. Rylance gives a subtle performance yet is absolutely captivating and he serves as the heart of the film, sometimes almost literally.

The action is fantastic, especially in a few key scenes. The movie’s first big action sequence is a race, where Parzival drives a tricked-out DeLorean and tries to outrace a whole slew of opponents, but the track is designed to defeat them, including a rampaging T-Rex from Jurassic Park and King Kong. This sequence is absolutely thrilling and teases just how closely you need to be watching for these references and easter eggs throughout the film.

One of my concerns with watching the trailers was the CGI effects for when they were in the OASIS. In the film, they didn’t bother me at all and it made sense that they didn’t always look fantastic because they were supposed to be in a video game essentially, so it didn’t take me out of the experience. And most of the effects were great, especially in these huge action moments.

“Will I enjoy this if I don’t get the references?” I think so, yes. You may not get every little nod and easter egg hidden in the film, but the story itself and this compelling world that has been created is enough to carry this film.

This movie also has a soul to it that Spielberg excels at. It’s joyous. And innocent. I found myself wanting to clap for our heroes and I felt like I was along for the ride with them. It’s an adventure in a way that other current action movies neglect. It doesn’t try to deliver never-before-seen stunts and tricks but it manages to feel more adventurous than those other action films because of its tone and its heart.

My only complaints, and these are minor, was that some of the secondary and tertiary actors weren’t fantastic, but they had fairly limited screentime. For example, a few of their jokes didn’t land or their line delivery felt forced but overall it didn’t effect much of the film at all.

I had an absolutely joyous time with this film. Yes, I am (pun intended) the target demographic for this film but even casual moviegoers should have a great time here. It’s a familiar tale but made fresh with interesting characters and clever twists and turns in the story. If you’re a nerd, you’ll likely enjoy this movie even more with the plethora of references and characters and weapons that you’ve seen before. Steven Spielberg delivers an adventure here that is full of heart and soul and there hasn’t been anything like this on the big screen in a long time.