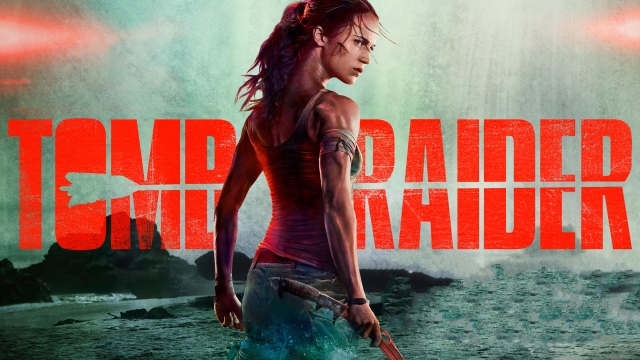 Movies based on videogames have a very bad history, with most of them ending up pretty horrible. In the last year alone, we got pretty tragic entries Warcraft and Assassin’s Creed. Tomb Raider relaunched a few years back with a solid story-based game and it looked like this movie might be trying to bring that story to life, so I had higher hopes than I maybe should’ve. Did this movie break the curse?

We follow Lara Croft (Alicia Vikander), a young woman whose father (Dominic West) disappeared mysteriously. She picks up the trail of where he went searching, leading her to a dangerous island off the coast of Japan. She is aided by a sea captain (Daniel Wu), whose own father went missing as well. They must evade another party seeking to plunder this island of its supernatural prizes, led by Walton Goggins.

As the lead, Alicia Vikander knocks it out of the park. If you’re not familiar, she was incredible in Ex Machina and won the Academy Award for supporting actress in The Danish Girl. Here, she brings Lara to life in very cool ways. She’s not a superhero, she’s not indestructible. She messes up but she kicks ass and keeps trying. She gets hurt but she learns and she adapts. As a heroine, Vikander totally nails it.

The story that we watch unfold is interesting enough, like a more deadly version of National Treasure. The puzzles and riddles are fun to watch and don’t slow down the pace too much. When the action kicks in, I thoroughly enjoyed it. It’s shot clean, not too much shaky-cam to distract from it. The stunts are interesting, deaths brutal, and effects are generally pretty good.

In my opening, I ask if this movie can break the curse of video game movies. It’s not perfect but it’d be 5/5 compared to most movies in this genre.

Walton Goggins as the main villain here isn’t disappointing per se but underused maybe. He’s not that diabolical, he’s just a henchman that is the focus of Lara’s anger. I’ve seen Goggins be pretty downright evil and it’s just a shame that he’s so tame here.

The story I mentioned above is fun but the climax might really underwhelm you. It sets up a potential threat but throws a curveball at you in the last few minutes. Without getting spoilery, I understand why the curveball was thrown but that still doesn’t make the resolution satisfying. If you’re building up to something epic, you better deliver something epic.

And lastly, the visual effects are hit or miss. Some sequences are great, while others feel unfinished or straight from the video game this movie is based on. It’s just not consistent.

Tomb Raider is excellent compared to the horrible video game adaptations we’re used to. Unfortunately that’s not enough. An incredible performance by Alicia Vikander can’t really save this movie but it keeps it from drowning. The story is up and down, with a climax that might have you a bit confused. The thrilling action is fun and interesting but inconsistent visual effects might detract from your experience. Overall, this is a fun time if you don’t have anything else to watch, but ultimately is pretty average.