I feel like we’ve been in a drought of good R-rated comedies lately, with even the best ones being simply mediocre. Game Night arrived with very little fanfare so I wouldn’t be surprised if you haven’t heard of it. Is it worth looking into?

We follow married couple Max and Annie (Jason Bateman and Rachel McAdams) who are both super competitive and into all sorts of board games and party games. This game night is special, as Max’s older brother (Kyle Chandler) comes into town and insists on a game night more intense than ever before, featuring a murder mystery. Well, things go sideways and they get wrapped up in a murderous kidnapping plot that is actually real, though our players have no idea that their lives are actually in danger. Our other players include Sharon Horgan, Billy Magnussen, Lamore Morris, and Kylie Bunbury. We also have Jesse Plemons (Breaking Bad) as their next-door-neighbor who wants desperately to join their game nights.

This movie is actually really interesting, managing to blend quite a few different genres and resulting in something fairly unique. At its heart, it’s an R-rated raunchy comedy in the vein of Bateman’s other recent comedies (Office Christmas Party, Horrible Bosses). It smartly borrows from other genres as well, most notably 80s horror films, with all the jump scares and cliches and even synth-heavy soundtrack. It’s a parody of these horror films without resorting to Scary Movie standards. It’s also a straight up action film at times, including shootouts and car chases and one really visceral brawl. It weaves these things together seamlessly and perfectly.

This wouldn’t work if these three dynamics faltered. Luckily they don’t. The comedy is top-notch, especially if you’re a Bateman fan already. It’s dry and subtle but knows when to go for the obvious joke. It all works. The fight scenes are really great and the horror managed to scare me a few times, too, meaning that this movie really succeeded at this interesting balance.

Both Bateman and McAdams carry this film and luckily have a great chemistry together. The supporting cast is generally relative unknowns but they all do their job and some of these folks will be on the rise after this for sure.

Lastly, there are some really interesting stylistic choices, including the use of a photography method called “tilt shifting,” that makes locations look like models or miniatures. The very landscape of the city looks like a board game, it’s all fascinating. There are some innovative methods for shooting this movie that totally work.

Very little. If you’re not a fan of potentially raunchy comedies, this won’t be up your alley, but that’s really my only warning. You may find it a bit cliche and predictable but I didn’t mind.

Game Night offers something really unique, a blend of comedy/horror/action that actually delivers on all three fronts. Our leads have great comedic timing and great chemistry with each other, while the haunting synth soundtrack and unique visual style will make Game Night stand out for a long time. 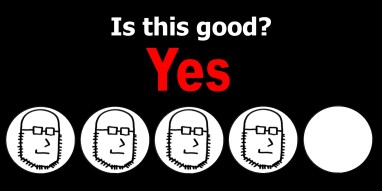