It’s January, which means we’re going to get a few months of pretty bad movies. We always get a handful of “shoot em ups” during January, usually in the vein of Taken. When I saw the trailer for Den of Thieves, I was intrigued but it also had the possibility of being entirely a cliche of the genre. How’d it turn out?

We follow the head of LAPD’s Major Crimes division, Nick Flanagan (Gerard Butler), as he stakes out a bank-robbing crew that are looking to pull off a major heist. This crew is full of former Marines, including Pablo Schreiber (Orange is the New Black), O’Shea Jackson Jr (Straight Outta Compton), Evan Jones, and 50 Cent. This becomes a game as Butler and Schreiber try to outwit each other, with the criminals’ end goal to rob the Federal Reserve.

This movie has a lot of elements that work.

There are some intense gunfights, most notably the climax. The shots are visceral and loud and the violence packs a punch. Unfortunately there are only a few action scenes like this, but they manage to impress when they do happen. We also get an interesting heist dynamic, almost like an Inside Man or Oceans 11, where we watch the plan unfold and are constantly getting twists and turns.

Gerard Butler is almost too convincing as our protagonist. He’s complicated and unlikable, which makes it hard to root for him. They spend a lot of time on building his character and giving us looks into his family, which makes him even more unlikable and these detours detract severely from the pacing of the movie. If the intention was to make him a realistic and three-dimensional character though, they succeeded. I’ve accused Butler of “phoning it in” in several movies, this one actually feels like he’s diving into it headfirst. 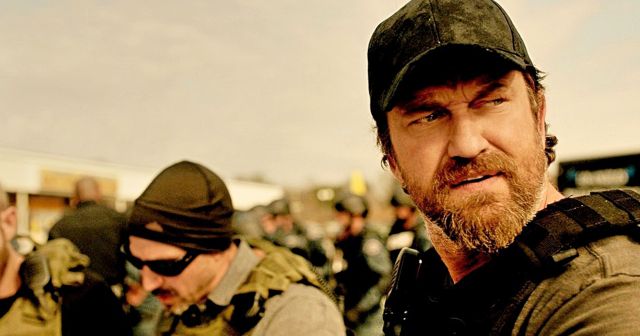 As I mentioned above, this movie tries to do something different, though I don’t know if it’s successful. This film tries to make our stars realistic and complex, but does so by taking detours into their private lives. We watch Levi (50 Cent) threaten his daughter’s prom date. We watch Nick (Butler) argue with his wife and (probably) traumatize his kids. These sequences offer nothing to the larger plot but yes, they make our characters seem real.

These detours also cause the movie to clock in at 2.5 hours, which is way too long for a popcorn flick like this. I could’ve maybe endured this length if it was full of action but this movie only has a few big action moments, meaning that the majority of the movie is dialogue and conversation. It’s slow, too slow for an action film like this.

The movie also has a very uneven ending. It has an incredible edge of your seat climax but then tries to throw you a twist, which is unearned and illogical. The ending had me scratching my head in disappointment and confusion.

Den of Thieves could have been awesome, if it really focused on nailing the right parts of the movie. However, a focus on character development actually hurt the film, resulting in a 2.5 hour runtime and relatively little action. Butler does what he can to save it and it’s a fun ride, some of the time, but ultimately this movie misses the mark.