There was a lot of hype for Thor: Ragnarok for a few different reasons. It’s a fresh comedic take on the character, it includes the Hulk, and it supposedly features the end of all things, the apocalypse known as Ragnarok. There’s a lot of factors in its favor, so can this movie possibly live up to that hype?

Without spoiling some cool moments at the beginning, I’ll keep it general. Thor (Chris Hemsworth) discovers that his adopted brother Loki is alive (played by Tom Hiddleston) and the two of them are essentially booted from Asgard when a new threat arrives, played by Cate Blanchett. Before kicking them out, she also destroys Thor’s hammer and leaves him essentially powerless. Thor finds himself on an alien planet ruled by an eccentric game show host (Jeff Goldblum) who finds joy in pitting gladiators against each other. The current champion is Thor’s old teammate, the Hulk (Mark Ruffalo). So Thor must defeat the Hulk and somehow escape this planet, return to Asgard, and somehow stop the end of days.

This movie’s director, Taika Waititi, is a comedic genius and I was hesitant about this sharp contrast to the first two Thor movies, but it totally works. What we get is much closer to Guardians of the Galaxy, almost feeling like a whole new franchise. Honestly, the previous Thor movies have been the lowest points of the Marvel Cinematic Universe, so I can see why they’d want to somehow pivot and save the franchise.

You will laugh nonstop. This movie is packed with jokes, to the point where you might miss a joke because you’re still laughing. Hemsworth and Hiddleston have a great back and forth, while Goldblum steals the show in every scene he’s in. The unexpected breakout star is Waititi himself, voicing Korg, who will be a fan favorite for sure after this.

I also appreciate the style and aesthetic of the film, also echoing the success of Guardians. Things are bright and vibrant and colorful, making the movie enjoyable to look at and full of little details to catch in repeat viewings.

On the flip side of all this, we have the more “end of days” aspect and what Blanchett brings to the table as Hela, the goddess of death. I think her performance was great but I don’t think they gave her much depth but it’s not Blanchett’s fault. I also appreciated the inclusion of other Ragnarok elements such as the fire demon Surtur and the giant wolf Fenris. Very cool to see on screen. 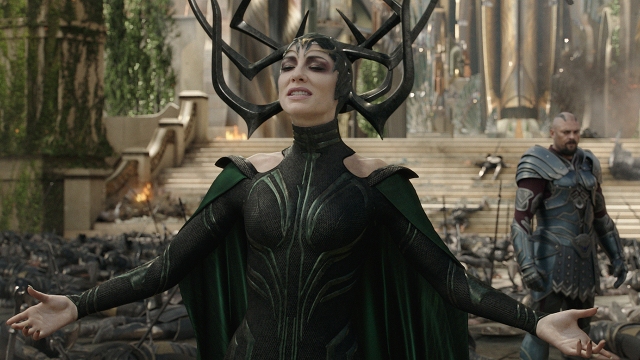 Ragnarok unfortunately falters in a few places for me.

While the humor is nonstop, that is somewhat jarring and tonally inconsistent with the darker aspects of the film, meaning that I didn’t really feel the weight of what was happening. There are some consequential moments and even character deaths that are underwhelming because we’re too busy laughing to really be affected by them. The choice to translate Ragnarok to the screen but with the tone of a comedy is an odd mishmash and doesn’t always work.

And while Blanchett is great, Hela as a villain feels almost like another Ultron, cracking jokes while also supposed to be threatening. I never really felt threatened by her and I didn’t quite even understand her intentions or motivation, so unfortunately she falls into the category of underwhelming Marvel villains, to me anyways.

Thor: Ragnarok is undoubtedly a great time at the movies, managing to give us even more laughs than other comedies like Guardians or Ant-Man. However, it does this by sacrificing some gravity in regards to the darker themes and the end of the world story. It’s likely the best Thor film and it sets up the next Avengers film perfectly, highlighted by fun additions like Jeff Goldblum and Taika Waititi. You’ll all have a great time here and you’ll likely want to see it multiple times to catch all the jokes but I wouldn’t say it’s one of the best that the Marvel Cinematic Universe has offered up.