This movie, a remake of a late 70s television show, just kind of appeared, without much fanfare. But it’s here now, at theaters around the world. Is it worth checking out? Or is the uneventful launch an ominous sign?

Dax Shepard wrote, directed, and stars in this remake, focusing on a former stunt motorcyclist that wants to become an officer in the California Highway Patrol to win the love and respect of his soon-to-be former wife (Kristen Bell, Shepard’s real life wife). He’s paired up with an undercover FBI agent (Michael Pena) who is investigating a series of robberies that seem to be connected to a group of corrupt cops, led by a threatening Vincent D’Onofrio.

When it comes to R-rated raunchy comedies, you probably know if that’s your thing. This movie has plenty of typical jokes, plenty of them revolving around slapstick violence, nudity, and throwing up. It’s juvenile but I know there’s an audience for that. If that’s you, you may enjoy this movie way more than others that might be a little more conservative.

The thing that holds this all together is the chemistry between Shepard and Pena. They’re likeable and interesting and just watching them banter is pretty amusing. Pena, after his role in Ant-Man, has really solidified himself now as a comedy actor that can hold his own.

I also appreciated D’Onofrio as the main villain. Like his role in Daredevil, he’s a powerful force here, including a confrontation in a gym that is really threatening. He’s a badass and it’s great to see him back in the spotlight.

In general, the movie’s pretty fun and there are some great moments that mesh action and comedy together. These moments however are sandwiched between some pretty inconsistent storytelling…

Shepard does fine as an actor but as a writer, I feel like he wasn’t quite prepared for this project. There are some major problems on the page, that his charisma or Pena’s comedy chops couldn’t save.

First off, the movie struggles with tone. It’s crude and gross at times, then turning for a second into a serious moment about Shepard’s character and his addiction to painkillers. There are glimpses into this serious story and those glimpses are great, with some actual fantastic acting from Shepard, but it’s hard to take that in, when the movie shifts immediately into a bunch of fart jokes. Pena’s character has a sex addiction that is somewhere in this weird space between serious and comedic, when you’re not sure if you’re supposed to be laughing.

The movie also suffers from inconsistent pacing. It feels like there are a few key moments and the rest is ad-libbed to fill in the blanks. This slows things way down, when these ad-lib scenes get long and the jokes don’t necessarily hit. It can be a tad boring for stretches.

In terms of topic, I mentioned it gets crude and some parts will likely trigger the more sensitive of you, especially regarding a reoccurring joke about Pena’s supposed homophobia. There are some potentially problematic bits, to be sure. 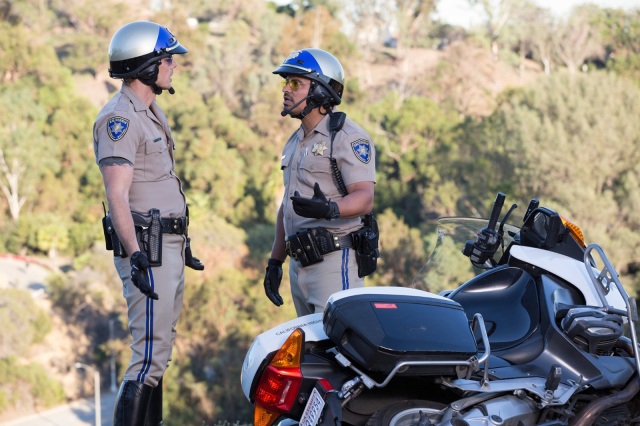 CHIPS is fine. Those of you that veer towards wanting slapstick and gross humor might enjoy this more than those of you wanting something a little deeper. I was disappointed when I would catch glimpses into something potentially really cool, just to see it devolve again. Some missed opportunities for sure. On a superficial level, there are some really funny bits but also some really flat bits. Not a bad movie, but not a stellar outing for Shepard as a writer/director either.