This is my last review of 2016, then I’m on to creating my Best of 2016 lists. Is this comedy, teaming up Cranston and Franco, able to deliver?

Stephanie (Zoey Deutch) wants her family to meet the love of her live, tech millionaire Laird (James Franco). So for the holidays, she flies her family out to California, including her father (Bryan Cranston), mother (Megan Mullally), and brother (Griffin Gluck). Here’s the problem: Laird has no filter, is incredibly profane, and eccentric beyond belief. This means he immediately clashes with Cranston’s character and this sets up our whole conflict. We also have Laird’s housekeeper and bodyguard of sorts (Keegan-Michael Key) and the artificial intelligence running his home (voiced by Kaley Cuoco).

As a comedy, most people will find this movie enjoyable. It’s packed full of laughs, mostly of the R-rated variety. James Franco is at his funniest, perfectly nailing this annoying and eccentric character that you want to hate. Bryan Cranston also delivers, always the straight man to Franco’s absurdities. Both of them do their job.

That’s really the biggest pro. It’s funny. That’s all you probably want from it, so what else can I say? 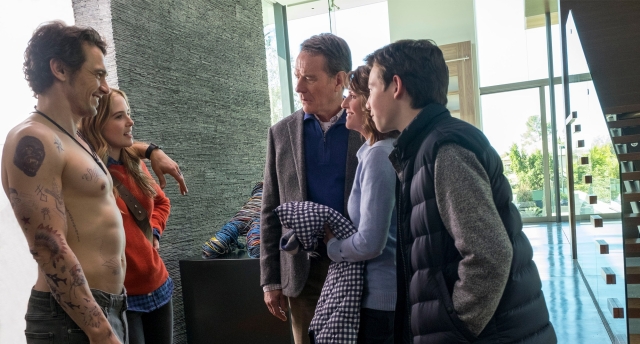 While yes, this movie is funny, it’s also incredibly cliche and predictable. In terms of plot, in the first few moments of the movie you can likely guess the basic key moments that will follow. A struggling paper supplier, who wants to take care of his family but doesn’t know how, suddenly clashes with an eccentric tech millionaire who is known for innovation and wants to marry this man’s daughter. Hmm. Who knows what’ll happen?

The jokes, while hitting often, aren’t very creative either. Too many times the movie resorts to grossness for the sake of grossness. We’ve got tons of poop jokes, tons of genitalia jokes, and several bits about the absurdity of cuss words (because it’s funny to hear Cranston curse). It’s very low brow but if that’s your type of humor, it’s plentiful.

In the arena of shock comedy, this one doesn’t do anything unique, floating in that “mediocre” range of movies that you’ll likely laugh at and enjoy but forget once you walk out of the theater.

Why Him? doesn’t do anything unique and its plot is predictable in the first few scenes. While it won’t win any awards for creativity, plenty of you will still have a good time here. It’s funny, sometimes really funny, but the jokes tend to veer towards the gross and obscene, sacrificing cleverness in the process. Movies can have both but this one doesn’t. If you don’t mind language and “potty” humor (in this case literally), you may have a good time with this movie.