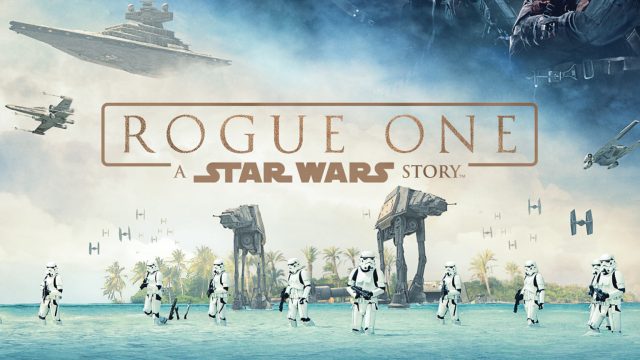 This movie doesn’t have the momentum of The Force Awakens, which was the first new Star Wars movie in 16 years. It does however have a special hook, in the fact that it’s a completely independent side story that fills in some of the gaps. This is the first of the “Star Wars Stories,” which will alternate years with traditional episodic entries. Does it succeed?

Rogue One takes place immediately before Episode IV: A New Hope, which was the first Star Wars movie ever released. The entirety of A New Hope is about using these plans that the rebel alliance have secured to take advantage of a glaring weakness within the giant planet-killer called the Death Star. Rogue One focuses on the small team of rebels that managed to find and retrieve those valuable plans.

We follow Jyn Erso (Felicity Jones), whose father (Mads Mikkelsen) is a designer on the Death Star. He’s there under duress and his daughter seeks to find and rescue him. The rebels want to use his information, so they send troops with Jyn. She crosses paths with a man who helped to raise her (Forest Whitaker) but who has now become a paranoid and dangerous militant. In our supporting crew of rebels, we have Diego Luna, Donnie Yen, Wen Jiang, Riz Ahmed, and a droid voiced by Alan Tudyk.

On the opposition side, we mostly focus on the military leader overseeing the Death Star’s creation, Krennic (Ben Mendelsohn). 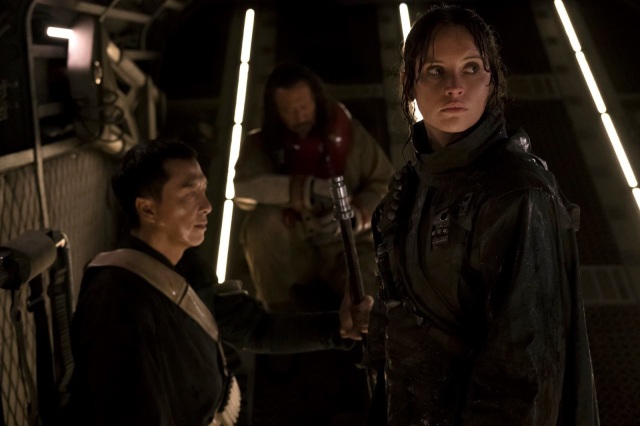 This movie isn’t a good jumping off point for new fans. But for those of you that love Star Wars, this is a love letter to you.

Rogue One fleshes out the Star Wars universe in a way that The Force Awakens kind of missed. There are tons of new planets and creatures and culture on display here that make these locations feel like real places. The attention to detail is incredible, giving us answers to some of the original trilogy’s biggest questions. So if you’re “in the know” enough about Star Wars, you’ll pick up on these things. It’s fan service to the max, which is awesome but maybe overdone at a few points, making this movie a little rough for new or casual fans to really dive into.

The talent here does an admirable job, though really Felicity Jones is the only one to get any sort of backstory. She’s great though, managing to carry this movie entirely on her shoulders.

Here’s the biggest pro about this movie. It has a thousand “oh cool!” moments. Director Gareth Edwards (Godzilla) and his team of writers obviously love Star Wars and so they knew what moments were important to focus on. “You know what would be cool? A giant AT-AT but on the beach instead of the snow!” They get it. There are great action sequences, plenty of humor, fascinating new mythology explored, and much more. This movie wasn’t bogged down by history as much as The Force Awakens was, which had to answer for a lot. This movie is allowed to exist in this little bubble and it totally works.

The action mostly works because the CGI is incredible mostly. It looks great across the board except for a few characters that stand out completely.

There’s a few key things that are keeping me from giving this a 5-star rating. The first is the inclusion of several characters that are entirely computer-generated and it doesn’t work at all, and their inclusion wasn’t really necessary. Or they could have used tricks to avoid showing them.

The bigger problem is that this movie overindulges in references and nods and easter eggs. There were constantly little references or cameos and it became distracting, many of these cameos unnecessary. The advantage was that this movie was a side story but it relies entirely on someone’s knowledge of the Star Wars universe, specifically A New Hope.

Now, there are comparisons to be made here. Another Disney-owned franchise is the Marvel Cinematic Universe. Should someone be able to dive into Doctor Strange without knowing the other 10+ movies that came before it? Yes. And they do, because Doctor Strange didn’t feel like it was crammed full of alienating easter eggs. Here, I don’t know if that’s true. I don’t know if someone could watch Rogue One without any other context and really understand what’s happening.

Lastly, the supporting cast of rebels is underused, I have no idea what most of their names were or why they’re there. It’s really Felicity Jones’ show, the others are just there to serve plot points and move the story forward, they’re not fleshed out at all.

Rogue One is great, assuming you’re in the know about Star Wars. You will love the references, the action sequences are great, and it really expands the universe quite a bit. Felicity Jones is great in the lead role, though her supporting cast is very one-dimensional. The visual effects are stellar, aside from a few completely computer-generated characters that don’t fit into the scenes at all. If you’re a fan, you’ll love this, but if you’re not really in the loop, you may find this movie to be a hard place to start.