My experience with Warcraft (as a brand) might affect how I rate this movie so here’s where I stand. Back when I was a wee lad, I played an intense amount of Warcraft, all three games for PC. I didn’t however get into World of Warcraft (I have an addictive personality and I know that). So I’m a fan of the lore, the backstory, and the mythology they’ve created, but I’ve been a bit out of the loop for the past like 15 years.

We have a nice fantasy landscape, where humans live alongside elves and dwarves (pretty standard fantasy fare) when suddenly a portal opens from another world and a massive horde of monsters called orcs charge through and begin to pillage everything they see. The humans are led by their king (Dominic Cooper) and the bravest warrior in the land Lothar (Vikings‘ Travis Fimmel). We spend a good amount of time with the orcs, focusing on a chieftain named Durotan (performance captured by Toby Kebbell) and his wife (Anna Galvin). An orc shaman (Daniel Wu) is using death magic to open these portals and Durotan knows that this magic will kill not only the humans, but the orcs as well, so he must find a way to have a truce with the humans, for the survival of both races.

We also have a powerful magician (Ben Foster) and a young apprentice magician (Ben Schnetzer), who stumbles upon the key to stopping the orc invasion. We also meet a half orc hybrid (Paula Patton) who is able to translate between the two races. 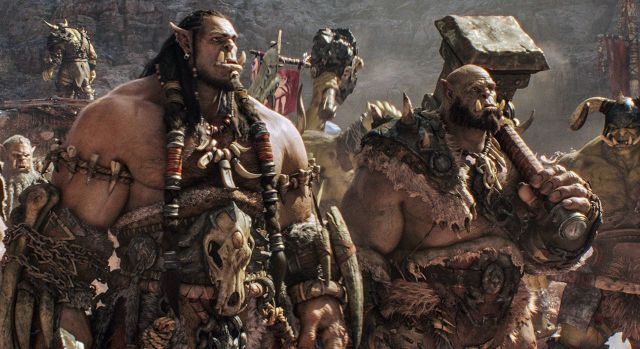 If you’re a fan of the Warcraft franchise, there is a lot of references and nods to stuff you love. There are characters you know, spells you’ve seen done in the game, and even nods to monsters and creatures from all across the mythology.

There’s also some cool moments, where each character gets that time to shine. Most of these cool moments belong to the orcs, who are by far the most interesting characters. Toby Kebbell delivers an incredible performance as the orc Duratan, who struggles with saving his people versus his allegiance to the horde. The orcs look great (at least, most the time) and they have a weight to them that I’m glad made it to the screen. Every punch feels like an earthquake, just the way it should.

A lot of other critics are bashing on some of the other performances, most notably Ben Foster and Paula Patton, but I didn’t mind. They weren’t award-winning but I’d focus the criticism on the writing of these characters, not the performances.

Let’s start with the written page. This movie should have been simplified. We’re trying to learn about two worlds but instead of savoring these cultures and species, we’re rushed from place to place in a story that ultimately doesn’t pay off. Too much happens for a 2-hour movie and most of it is nonsensical. There are a few villains in the movie and all of their motivations are revolved around “Well, they’re just crazy.” That’s not a good motivation. And it’s not interesting.

This movie could have been streamlined to really focus on the orcs and the humans. Instead, the focus is really on this bigger evil that threatens both. Couldn’t that have waited til a sequel? Half the time, I had no idea which orc was which so it was hard to care about them. We deserved more time with them before diving into a convoluted story.

To make matters worse, they took the only decent female role (for the halfbreed Garona, played by Paula Patton) and shoehorned an awkward romance story which had no place in this movie. She had the potential to be an interesting character and a chance for Patton to show off some acting chops, but instead they made her almost a damsel in distress character. Almost. She had some badass moments but she had just as many quivering lip and lingering gaze moments. 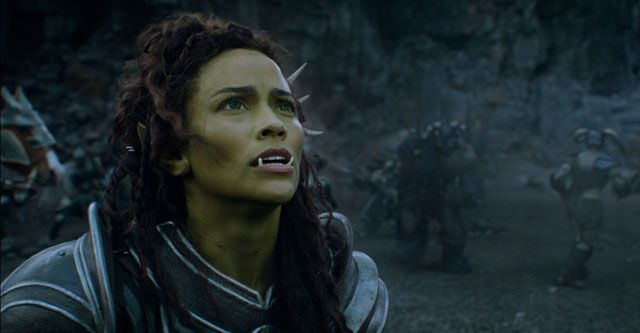 Let’s talk about how the movie looks visually.

Some moments look great. The orcs look fantastic… sometimes. Usually when the camera zooms out and starts to show the orcs in action, it loses realism. Their hands look weird. They look like they don’t fit in with their environment, like it’s an obvious soundstage somewhere. The fight scenes look very much like a cutscene from a videogame, as opposed to a blockbuster movie.

Let’s talk about these fight scenes. There’s surprisingly very little and when they do happen, poor editing really takes away most of the effect. It’s choppy and the fight scenes aren’t as epic as you’d imagine them to be. This isn’t Lord of the Rings. In the climax, there’s also a really disappointing one-on-one dual that ends in the most anticlimactic way imaginable.

In general, the editing is really bad. The movie jumps from place to place without much transition, sometimes feeling like entire scenes were cut that should’ve existed between them. It’s awkward, jarring, and feels amateur.

This movie is disappointing, both as a fan of Warcraft and as a fan of film in general. Knowing the lore, there were so many cool moments and opportunities that were missed. The orcs looked great but the battles felt choppy and we didn’t get the sort of massive battles that a movie like this should have delivered. The entire movie felt like it was shot on a soundstage, with none of the locations offering any sort of atmosphere. On the whole though, this movie just felt nonsensical, with a convoluted plot that slowed down what should have been a fun adventure film.