Review: Me Before You

There’s a formula for making people cry and this movie seems to be the ultimate attempt to do so, plus it’s jam-packed with nerd icons that haven’t really made it on their own, including alumni from Game of Thrones, Harry Potter, The Hunger Games, Doctor Who, and more. Will the formula work though?

Will Traynor (Sam Claflin) was hit by a motorcycle and paralyzed from the neck down. Before this, he was a successful and charming businessman, as well as an adventurous worldly thrillseeker. So being confined to the chair isn’t his cup of tea. Did I mention his family is rich? They hire a nearby woman to come and help cheer him up, named Louisa (Emilia Clarke). Will the cheery girl be able to sway the grump? We also have Will’s parents (Charles Dance and Janet McTeer), Louisa’s sister (Jenna Coleman), and Louisa’s boyfriend (Matthew Lewis, Neville from Harry Potter).

The main draw for a movie like this is to see two people fall in love. So does the chemistry between Claflin and Clarke work? I think so, yes.

Emilia Clarke is quirky and fun and generally likable (though maybe a little annoying at the beginning). She quickly grows on you though and it’s a much better display of her acting chops than Terminator: Genisys was. The standout here though is Sam Claflin, who I really only know as Finnick in The Hunger Games films. This is a tough role and one that could be easily overdone. I thought his subtlety (and the subtlety of the writing) was refreshing, as small moments and looks showed us a lot of depth. Together, they had an incredible chemistry and enough to satiate most rom-com fans.

Aside from the chemistry between the leads, the next thing on your checklist is going to be “Am I going to cry?” That’s what we want, when we see movies like this. I teared up during the trailers, I knew this movie would be a cryfest.

And it was. Some moments were small, like one-liners from Claflin that make your heart sink. Other moments were big, like you would expect. Punches to the gut that make you sob. It’s an emotional roller coaster in all the right ways.

This movie is nowhere near perfect. While yes, it is an emotional rollercoaster, it also denies you a few big moments. You cry because it’s sad but it lacks those big heartfelt punches, especially in the film’s climax, as it skips over what could’ve been the most impactful moment of the story.

I also found the writing and direction to sometimes be overly cheesy, meaning that the audience would laugh at moments that were not intended to be funny. Quite a few times this happened, which really takes you out of the experience. I’d recommend trying to see this movie at an odd time, to avoid the big crowds. Or just wait until DVD, so you can cry on your own terms in your own home.

Also, I found the music choices to be somewhat odd and inconsistent. It was all huge top 40 love ballads, including two by Ed Sheeran, but it often felt like a music video, rather than a movie. The songs would fade into each other, prioritizing actual licensed music over a traditional score. Sometimes this worked, other times the music felt too obvious and in your face, which (again) takes you out of the moment.

If you just want something romantic and kind of funny and something you can cry to, Me Before You will definitely do the job. It comes with some great performances by our leads, though some amateur decisions affect the overall product, such as glossing over potential emotional highlights, odd and disruptive music choices, and some moments that were a little too cheesy for most folks in the theater (so you may want to wait to rent this, for the full emotional impact). Not a great film, but it’ll do the trick if you know exactly what you want from this movie. 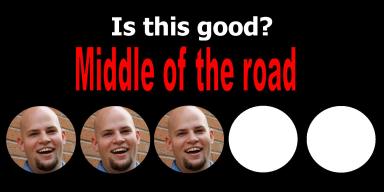 1 Response to Review: Me Before You