A young, down on their luck punk rock band manage to book a gig at a remote roadhouse run by a Neo-Nazi gang. After witnessing something they should not have, they become trapped in the venue’s green room and must risk life and limb to escape. Green Room is the third feature film from Jeremy Saulnier, who most recently wrote and directed Blue Ruin, a critically acclaimed, self-financed revenge thriller and one of my personal favorites of 2013. This time around, with the backing of Broad Green Pictures, Saulnier was able to procure the (indie) star power of Anton Yelchin, Imogen Poots, Alia Shawkat, and of course, Sir Patrick Stewart. Despite Blue Ruin having only screened in 7 theaters during its run, with A24 distributing, Green Room is now showing in most theaters nationwide.

Running at a lean 95 minutes, Saulnier doesn’t bother with prolonged expositions or setting up elaborate backstories for our characters and there isn’t really a profound underlying message to take away from it all. The set-up is straightforward and it gets right to point. But its tautness is far from being a detriment and its straightforwardness is not to be mistaken for pure simplicity. Several crucial elements are effectively crafted and converged with this singular narrative, resulting in something unique that surpasses the hell out of other similarly plotted works.

A majority of the film takes place in a remote venue/bar somewhere in the backwoods of the Pacific Northwest. Furthermore, a majority of that takes place in the venue’s green room (that’s the title of the movie). The isolated, contained location and the omnipresent danger create a deadly cocktail of fear and suffocation for the characters and viewers alike; an already claustrophobic situation which is made even more confining by its 2:35.1 aspect ratio. Even when the film briefly moves to more spacious locations, it remains unrelenting and still leaves you with no room to breathe. 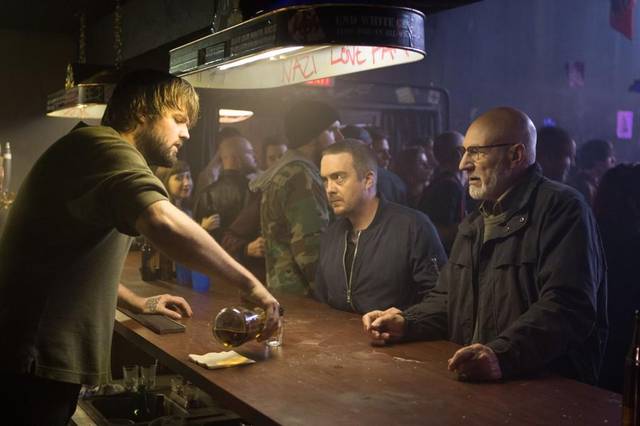 Despite the limited nature of the film’s setting, out of it is born clever resourcefulness by our characters and a litany of ancillary details that greatly reinforce the believability of the world that this subculture exists within. From the Doc Martens and the bomber jackets to the hateful stickers plastered throughout the venue to Imogen Poots’s haircut, these little details make up a realistic, lived-in environment that in no way feels contrived. And of course, enveloping it all is the precise editing and its gorgeous cinematography. Even within all the rawness is some style and like with Blue Ruin, its titular color is the main color in its palette, appearing in some form or another in just about every other shot, never feeling forced.

Though we never really dive deep into our main characters, they’re likable enough and we strongly root for them by default, especially considering that our villains are murderous Neo-Nazi punks. Our protagonists are merely a pack of kindred spirits who are already on a path of survival before being thrust into a survival situation about a thousandfold worse. Though character development is wholly secondary in this case, their welcome witty banter, harmless moral ambiguity, and humanizing uncertainty about themselves (from music to murder) give us more than enough to sympathize with them. When Poots’s character gets in on the action, a little bit of vengeance is thrown into what is already brimming with detail, atmosphere, and action. Feelings of fear, regret, pain, and vulnerability are made incredibly palpable by the cast, with Poots and Yelchin in particular. Sir Patrick Stewart, despite the ambiguous accent, successfully plays against type and strikes fear into your heart with his calm, icy demeanor.

Much like with Blue Ruin, Saulnier takes a standard genre set-up and manages to transcend it beyond other less-ambitious efforts with his precise execution, feel for atmosphere, and eye for detail. The resultant Green Room is a cleverly contained, detail-rich, paralyzing thriller whose unflinching violence echoes exploitation horror, though trading in tastelessness and campiness for realism and visceral grittiness. Its thrills are consistent, tensions remain high, and much blood is left to be cleaned up. 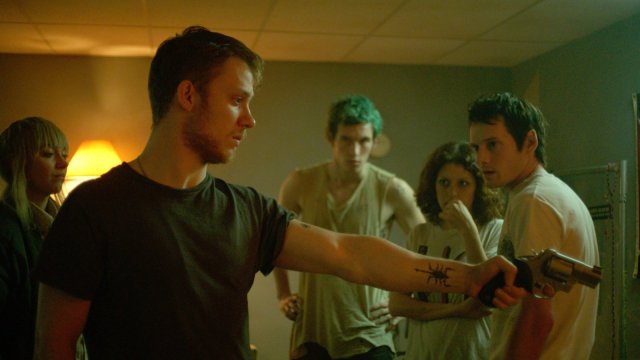 As with any other movie, it has its ultra-minor, illogical missteps and convenient occurrences, none of which are really at all distracting. Additionally, there is a lack of a strong attachment to our protagonists, but as I mentioned before, they’re likable enough. And frankly, there’s no room to get to know and fall in love with them amidst all the calamity and bloodshed. It’s just more fitting that way. Lastly, the film can easily be criticized for an unoriginal set-up, but that would be incredibly reductive. The set-up is only a part of the equation and I’ve already explained above what separates it from other run-of-the-mill, contained escape thrillers.

An area of subjectivity, however, that might keep some viewers away is its unforgiving, bloody violence. Just about nothing is implied, but rather shown in all of its gory glory. The makeup department did an amazing, foolproof job with this one.

Green Room is a straightforward, frenetic yet precise tale of survival teeming with atmosphere and tension. With a dash of wit and vengeance, it’s an incredible concoction made from the simplest of premises that’ll have you checking your windows and locks, no matter where you are. Just take it from Sir Patrick himself: “…and round about page 30-35 I close the script and I got up and I walked all around my house checking all the doors and all the windows. I put on the perimeter lights of my property, I put on the alarm stay mode inside, and I poured a large glass of whiskey.” 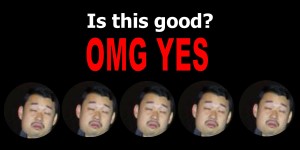