If you’d like a video review instead (including a non-spoiler section AND a spoiler-filled section, watch this: 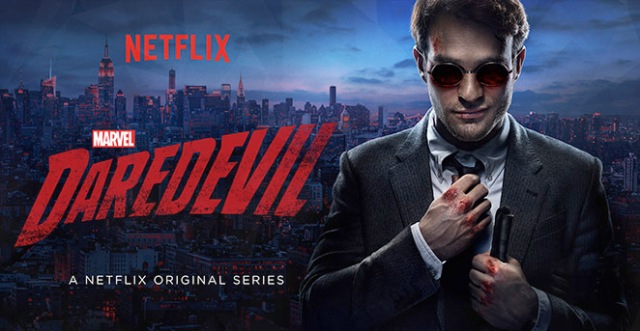 Daredevil season one was fantastic. One of my favorite things that Marvel has ever made. That means that season two had incredibly high expectations. Could this second season live up to the first?

When he was just a kid, Matt Murdock (Charlie Cox) was in an accident that left him blinded yet now able to tap into his other senses to an almost supernatural degree. In the first season, he faced off against the Kingpin (Vincent D’Onofrio) while managing to also run a law firm with his friend Foggy (Elden Henson) and Karen (Deborah Ann Woll). In the second season, we get two new characters that shape our adventure. The first is Frank Castle, also known as the Punisher (Jon Bernthal), who is a vigilante just like Murdock but takes out his enemies permanently, something that Murdock won’t do. We also eventually meet an old flame of Murdock named Elektra (Elodie Yung) who comes with information about an upcoming battle that Murdock must prepare for.

Is this as good as season one? Yes. Potentially even better.

The addition of Bernthal and Yung as reocurring characters was genius, as both of these characters completely jumped off the screen and were great additions to the Marvel Cinematic Universe. Bernthal especially, as he gave arguably his best performance of his career here, giving us a deranged homicidal maniac that you find yourself actually empathetic for.

With the addition of two new major characters that get into a lot of fights, it means this season has much more action than season one. It was almost exhausting. The action sequences are fantastic though, absolutely upping the game from season one in almost every way.

While the new characters were great, our preexisting characters got even more to do. Most notably, Foggy and Karen both got great moments and annoyed me far less than they did in the first season.

This season also smartly broke up the formula that both Daredevil season one AND Jessica Jones followed, which was one villain who was given one entire arc that lasted the entire season. Here, we get 2-3 episodes that deliver small arcs. They build on each other yes, but it feels quicker and like more happens.

Jon Bernthal as Frank Castle, aka “The Punisher”

Not to spoil anything but this show dives further into some supernatural storylines and some of these plots don’t really work, usually because they don’t make sense. I binged all 13 episodes back to back, so maybe I missed something, but there were quite a few questions and plotholes in the last few episodes.

Daredevil continues to be the best thing Marvel is putting out. It’s hard to give characters time to develop in a 2 hour movie but in a 13 hour show… Characters like Punisher and Elektra now get great introductions and substantial arcs. The action is fantastic, the humor witty, and the show absolutely enthralling. I’m already excited to watch it again. If you’re interested in a spoiler discussion, watch the video at the top of the page.