So here’s my history with this franchise. I thought the first movie Divergent was awesome, I think I even liked it more than the Hunger Games movies. However, the sequel Insurgent failed to recapture that spark and fell into very traditional cliches. So this movie could go either way: Redeem the franchise or keep falling further.

You kind of need to see the other films first because this movie does a horrible job at informing/reminding you of what happened before this. Basically Tris (Shailene Woodley) and her group of ragtag rebels stumble upon a new city that might hold the key to saving their entire planet. With Tris, is her love interest Four (Theo James), her brother Caleb (Ansel Elgort), her friend Christina (Zoe Kravitz), and smartass Peter (Miles Teller). We also have the leader of this new city David (Jeff Daniels) and two warring leaders of rebels (Naomi Watts and Octavia Spencer).

Not much, unfortunately. There’s a few fun action scenes but they’re generally forgettable and the visual effects keep these scenes of suspense from really coming to life.

The only talent that really popped off the screen is Miles Teller, whose ridiculous one-liners always got laughs from the audience, intentional or not.

There’s a lot wrong with this movie, similar to the long list of problems with Insurgent.

Firstly, it’s kind of boring. The plot is really similar to number two, which is a bit of a problem. “Tris and her friends come into contact with a new group who they must figure out if they’re friend or foe and withstand various physical and mental challenges in order to overcome.” Maybe that’s most young adult dystopian franchises.

As I mentioned above, the special effects are downright horrendous in a few scenes. The green screen work is amateur. There are some action sequences that slow down for effect but it looks horrible, most notably a truck that launches over a ravine and slows down so that the driver can exchange glares with Tris and her group. I laughed out loud. 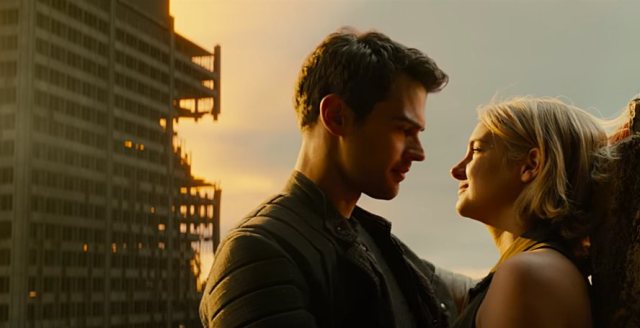 Speaking of laughing… I laughed a lot, though I think only Miles Teller was supposed to actually be funny. The dialogue seems like it was written by a kid and no one proofed it before they started shooting. I’ve seen my fair share of dystopian adventures like this and some are really good, there’s a way to do dialogue that seems natural. Here, that wasn’t the case. It was cringeworthy, even though actors like Ansel Elgort are extremely talented, which is frustrating.

So the story is cliche and the dialogue is corny… that must be it right? In addition to all that, the movie is also just plain nonsense. There were plenty of moments that I let out an audible “…What?” after something happened. It doesn’t make sense.

I don’t know who would like this movie. I doubt fans of the books will and most discerning moviegoers won’t enjoy it. If you’re still interested, just go in with super low expectations. It’s a predictable movie, riddled with corny dialogue and inconsistent visual effects. You’ll laugh a lot but I doubt the movie is supposed to be this funny.