It’s a rough start to open against Star Wars: The Force Awakens. Luckily for Sisters, when I walked into the theater, it was relatively crowded. So I think it’ll make decent money regardless of the behemoth it’s competing against.

We meet Kate (Tina Fey) and Maura (Amy Poehler), two sisters who come back to their childhood home and find out that their parents have sold it. They have one night left in the empty house, so they decide to throw a huge party. Tina Fey plays the sister who is always making bad mistakes, including ruining the relationship with her own daughter. Poehler’s character, on the other hand, has her life together and really goes out of her way to help others, oftentimes without their consent.

The twist here is that Poehler’s character really wants to go wild at this party so she asks Fey to be the sister that is the “party mom” and doesn’t drink. So now we see the two sisters play against their archetype in a pretty crazy party scenario.

At the party, we meet people who went to school with these two sisters but they’re all in their 40s now, so we have an interesting scenario of all of these adults with children letting go and getting wild. Included in this cast, we’ve got Bobby Moynihan, Maya Rudolph, John Leguizamo, Rachel Dratch, Samantha Bee, Kate McKinnon, and Jon Glaser. We also have Greta Lee as a Korean nail specialist and Ike Barinholtz as the potential love interest for Poehler.

Fey and Poehler have a great chemistry together so it’s great to watch, especially flipping their roles from the movie Baby Mama.

The funniest moment included Greta Lee, who plays a Korean woman who works at a nail salon, and an exchange she has with Poehler. Comedic genius and likely the highlight of the movie.

I appreciated some of the more serious moments, as these sisters cope with growing up and moving on. The way that they used this large party to showcase these adults and their problems was nicely done too. It was a nice change as opposed to typical college-age parties. The comedy worked in some of these sections, as we get moments like the mild-mannered mom who suddenly is hanging from the rafters. It was a nice twist.

And lately John Cena has been killing it in these comedy movies. He’s the next Dwayne Johnson, I can feel it. 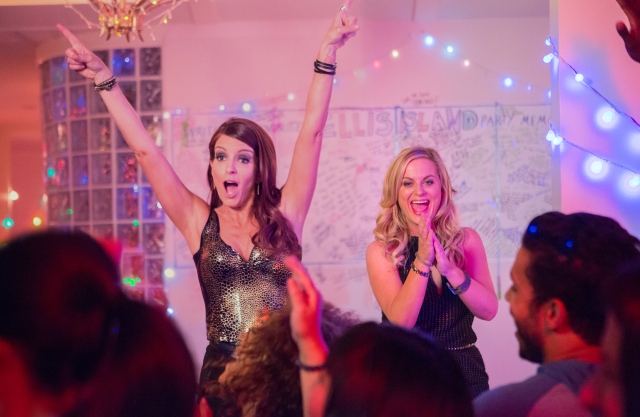 As a comedy, unfortunately this movie missed a lot of beats. The amount of laughs we get isn’t worth the rest of the journey. There were a lot of jokes that went too crass and too overboard, seemingly for shock. Bobby Moynihan, who I usually really enjoy, was probably the weakest link, but I think it might’ve been intentional. They tried to make him the most annoying guy from high school but he was actually the most annoying person in the movie. However… He did provide a few of the biggest laughs as well, so I’m very conflicted. I think they might’ve overdone him in the earliest parts of the movie when they really didn’t need to.

I’m not going to write too much because I just wrote a huge review for Star Wars so that’s my only real complaint. This is supposed to be a comedy and it really just falls flat and is relatively uninteresting.

Sisters is the definition of mediocre. It’s fine. Kinda funny, kinda clever, but ultimately nothing special. Decent performances. I wouldn’t pay to see this in theaters but it’s a solid choice if you ever see it streaming somewhere.