Reviewing any Halo game since Halo 2 is mostly an exercise in futility. While the series has had its ups and downs, each new Halo game has, unequivocally, always been a success. So why do we bother wasting words on Halo 5: Guardians when its fate is already sealed?

More specifically, why do I bother doing it—and a week after all the real reviews have been published, no less? I guess it’s simply because I want to. Halo has been a part of my personal history since I was 14, and I’ve grown attached to it as a constant in my
life. It’s a game I’ve always been able to depend on. And sure, I play many other great games today, but Halo is the only one that, well, can make me feel like a kid again.
Despite my love for the series, my immediate reaction to each new installment is to nitpick it to pieces. Like, seriously, does nobody working for 343 Industries remember the glorious frag grenade explosions from Halo: Combat Evolved? They were glorious! Now we just have these little firecrackers—poof and they’re done. I could go on about animations that don’t mesh up with the 60 FPS frame rate, or about doors that mysteriously disappear into solid walls when they open, or the occasionally odd AI behavior, but after finishing Halo 5’s campaign, I think this may be the least nitpick-worthy Halo game of them all. And really, Halo has never been a game about achieving perfection in any metric except one: gameplay. And this is where Halo 5 excels.

In many ways, the gameplay feels like both the most advanced Halo game yet, but also the most familiar. This is partly thanks to environmental design that’s clearly focused on cooperative play, offering multiple flanking routes and a mix of long sight lines and
tight quarters that keep encounters interesting and varied. There are also fewer invisible walls than some other more recent Halo titles and the environments are more welcoming of exploration. You are even rewarded for forcing vehicles into areas they weren’t meant to go, a staple “feature” of the original Halo that increased the replay value of that game’s campaign ten times over. (An aside: I forced a Warthog past a blockade into a room
full pathways that were just wide enough to drive on, with jump pads that could launch the vehicle from platform to platform as my AI gunner fired on enemies below. There was purpose in this design, and it was too damn fun to be coincidence. So kudos, 343i, for letting players have fun when we try to break things.)

Halo 5 is, in one basic sense, a return to its roots as a sandbox game, which was the key competence of the original that enabled it to live up to its subtitle of combat evolved. With very few exceptions, players are free to make tactical decisions about each encounter, without being required to use a specific weapon, vehicle, or approach. It is a welcome reprieve from the plethora of gorgeous but boring shooters that try to imitate cinema and
rely on scripted events to make things seem exciting (I’m looking at you, Call of Duty). In Halo 5, you can play the same encounter ten different times and go about it ten different ways. This makes for a healthy reminder of why we enjoy playing video games in the first place: player agency. As for the narrative, I’ve heard mixed opinions about Halo 5’s story. Personally, I found it to be one of the better ones. The caveat here is that I might be filling in a lot of the blanks with information I gleaned from reading a couple of the Halo novels
and watching Forward Unto Dawn and Nightfall. If you aren’t so well steeped in the lore—and certainly if you haven’t played all the games in the series up until now—I can imagine Halo 5’s story would seem a little confusing, to say the least. Without giving
anything away, I’ll just say that I was happy the writers were able to breathe new life into a couple of the series’ old characters, and I honestly found it difficult to peel my eyes away from the TV after witnessing the cliffhanger ending. Halo 5’s story is successful in answering the questions left at the end of Halo 4, and sets up even more unknowns for what I’m sure will eventually become the story of Halo 6. It may leave you scratching your head, but at least the narrative isn’t overly heavy-handed: it lets a game be a game. 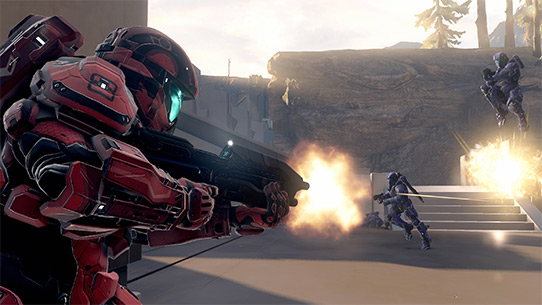 The campaign is a great ride that should appeal to both new Halo players (minus the head-scratching story moments) and long-time fans alike. But the campaign is only one part of any Halo game, and for many players, not the main part. Multiplayer is another beast entirely, and Halo 5 feels like the most nuanced, perfected approach yet. The core mechanics are there, but they’ve been turned up to 11. Every weapon seems to hit harder,
kills and deaths come quicker, and precision is more important than ever. The game is finely tuned for pro players, and novices may be turned off by how challenging the multiplayer experience is initially. Stick with it, though, and the game will eventually sort
you into one of six Competitive Ranking Scores, which should mean you’ll find yourself matched against similarly-skilled opponents more often. It’s not to say that newbies can’t
immediately have fun online—especially in the 24-player-plus-AI mode, Warzone—but you might have to put up with a frustrating learning experience before you learn the ins and outs of how to move-shoot-melée-repeat.

Difficulty aside—or perhaps thanks to it—Halo 5 is also the most intrinsically rewarding competitive multiplayer game I have played in a long time—perhaps ever. There is a rhythm to it that’s almost musical. When you’re off, it’s frustrating; but when you’re
on, it’s like dancing gracefully on the edge of a knife, and the game seems to be mysteriously aware of this. That is to say, I believe that feeling is by design, not happenstance. 343i put an extreme effort into building and testing Halo 5 multiplayer with pro gamers, and it shows. I will never be in the same league as MLG players, but that doesn’t stop Halo 5 from delivering a competitive experience that makes me feel like I am.

That said, I cannot conclude this review without mentioning the one change that Halo 5 made for the worse: getting rid of split-screen play. This isn’t just for competitive multiplayer, but even for campaign co-op. Playing the campaign together with your friend, parent, child, sibling, random guy off the street, roommate, college buddies, et al, has always been a staple of the series. While 343i claims technical reasons for this decision, it’s hard to not to see the lack of split-screen play as Microsoft’s misguided attempt to sell more Xboxes (Xboxen?) and Xbox Live accounts. I won’t let it affect the final score, since fewer and fewer games allow for split screen these days, but it’s still sad that it had to be this way.

Halo 5: Guardians is a rare example of an old dog being taught new tricks. But the game is successful not just for what’s new, but rather for what’s refined. For fans of the series, it feels like a welcome home. With five numbered titles under its belt, the Halo franchise has survived three console generations and two developers. I suppose that’s not really an oddity in this industry, but it’s still proof that a solid core mechanic and thirty
seconds of fun can go a long way. 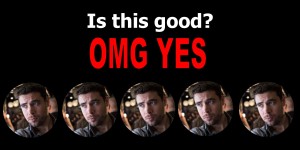