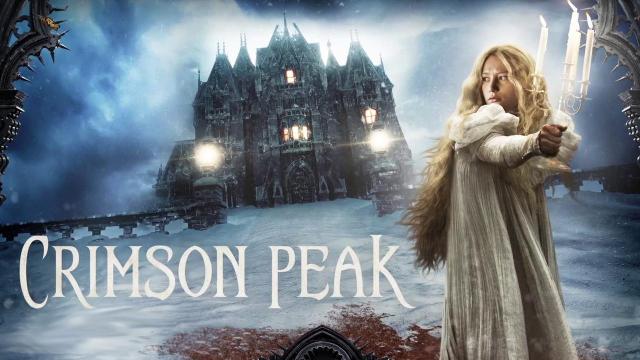 I finally got around to seeing Guillermo Del Toro’s newest movie Crimson Peak. Originally, I was really hesitant because I’m not much for horror movies, even though I loved his past films like Pan’s Labyrinth and the Hellboy films. Eventually I caved. But does Crimson Peak have the same magic as his past films?

Mia Wasikowska (Alice in Wonderland, Jane Eyre) stars as Edith, a young author in young America, who meets a strange yet intriguing man named Thomas (Tom Hiddleston). Eventually, she leaves America to go back to England with him and live in his mansion, aptly nicknamed Crimson Peak. Also living in the house is his sister Lucille (Jessica Chastain). Things get weird when Edith starts to see and speak to ghosts, most notably her dead mother.

We also have Charlie Hunnam (Pacific Rim, Sons of Anarchy) as a man who’s quite smitten with Edith and starts to investigate when things go sideways.

Visually, this is definitely a Guillermo Del Toro movie. The mansion itself is a character in the movie, as it creaks and breathes. It’s somehow simultaneously beautiful yet terrifying and disgusting. The ghosts that live in the mansion are also grotesque and beautifully designed, yet the CGI effects don’t do the designs justice.

In terms of talent, it’s all decent, with the standout being Jessica Chastain, who you discover almost immediately is off her rocker. It’s a fun role for her, since I’ve only really seen her as somewhat composed and introspective characters. Hiddleston is fine also, though the script doesn’t really push him beyond what we’ve seen before.

Unfortunately, this movie is very much style over substance. The scenery, especially the mansion itself, is incredibly captivating but the story that happens there is relatively predictable and almost boring for most of it. This isn’t a ghost story, for the most part. The first third is a mundane period movie about a girl and her crush, so I felt like it took too long to get to the mansion, where things get interesting. But once we’re there, it’s all relatively calm and even the ghosts don’t pack much of a punch.

The tone of the movie is also off, as it’s so melodramatic that I found myself chuckling through most of the dialogue and even laughed at decisions that our heroes would make. The movie finally kicks into gear in the climax but it doesn’t mesh with the rest of the movie up to that point.

The biggest problem is that the movie doesn’t succeed at anything. It’s not scary. It’s not exciting for the most part. But it’s also not going to please people wanting a romance set in early America. It’s straddling genres in a way that likely won’t please most audiences.

Also, I don’t get Charlie Hunnam. In both Pacific Rim and Sons of Anarchy, he’s uninteresting and he was just the same here.

Crimson Peak is likely Del Toro’s weakest film, at least of the ones I’ve seen. It doesn’t quite fit in any genre completely and therefore doesn’t really succeed as any of them. It’s not really scary, as the CGI isn’t believable for the ghosts. It’s also boring for big sections of the film, which undercuts any suspense you might’ve felt. The climax is thrilling and edge of your seat action but it happened two hours too late. Visually, the movie is really cool and the mansion is quite a character, but the lack of substance makes this movie lackluster.