This movie really failed on marketing. I don’t think anyone is excited about it, as I saw the movie in a theater by myself. I also had no idea that Jake Gyllenhaal, Keira Knightley, and Robin Wright were even in this movie. Maybe the trailers were bad. Maybe there was just a lack of advertising. Regardless, I was surprised when I saw these familiar faces show up.

Located in Nepal, Mt. Everest is the highest peak in the world. Jason Clarke (Terminator: Genisys and Dawn of the Planet of the Apes) works at a company that escorts people to the peak, for quite a hefty price. In his group, he has Josh Brolin (the guy who gets a high from risky adventures) and a normal average guy named Doug (who almost made it to the peak once before, played by John Hawkes). They also travel with journalist Jon Krakauer (played by House of Cards’ Michael Kelly). Also on the mountain is competitor Scott Fischer, played by Jake Gyllenhaal. We also have several wives that we see at home, most notably Keira Knightley and Robin Wright (also from House of Cards). Oh, and Sam Worthington shows up as another mountaineer who sees things start to go awry and tries to help rescue this team as the mountain becomes more and more unstable.

Like I said, I was surprised that some big name talent wasn’t heavily pushed in the marketing but it actually worked out because some lesser talent got a chance to shine and really put on some incredible performances, most notably Jason Clarke, who’s come off as bland and uninteresting in his other films. Here, he delivers some fantastic moments, as does John Hawkes, who plays Doug, an average guy who wants to show the world that average guys can do incredible things. Though their parts are less, both Keira Knightley and Robin Wright deliver some of the most emotional moments, as they react to the ongoing struggle that their husbands are enduring.

This movie is relatively calm for the first half, as they begin their preparation. But it works perfectly, as the suspense is built to an incredible degree. While they prepare for weeks, Everest looms over them and you just know that things aren’t going to work out. It’s going to be tragic and you know that. There aren’t many fast-paced action scenes like the trailers would also lead you to believe (I thought there’d be more avalanches) but the sense of dread and danger is always there. 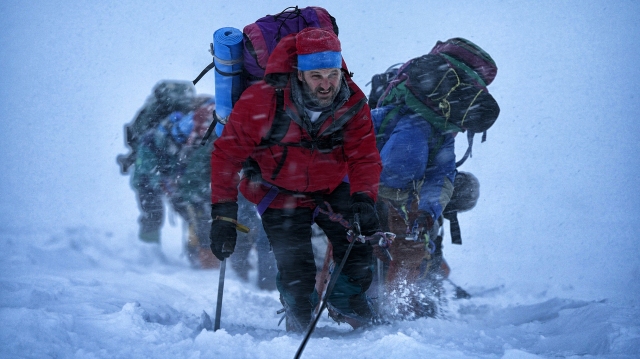 In the second half of the movie, we encounter the actual danger. Mistakes that were made, decisions that decided someone’s life or death… It’s not necessarily action-packed but there are many moments that you forget to breathe, watching people become one with the mountain. It made me want to never step foot in the snow again.

And while Jake Gyllenhaal doesn’t have a huge role, he delivers a great performance and I think it’s saying something that he took his role and managed to deliver a great and subtle performance, while not getting top billing and not much screentime.

These complaints are minimal but they add up. The movie starts a little jarring, not giving you any context but instead slowly revealing who our characters are. I get what they were going for but the first 10 minutes or so were a little hard to follow, unnecessarily so.

Also, it gets difficult to keep track of your characters when they’re all wearing heavy suits and face masks. Someone could literally be freezing to death and I was trying to figure out who it was. I think they tried to fix this by having them remove their masks everytime there was dialogue but I question if that’d be a great idea in the reality of the situation (ie, when you’re freezing to death).

Everest was marketed really strange, so don’t go in expecting an action thrillride. It’s a slow burn, building up suspense until things all go absolutely wrong. Jason Clarke finally delivers a stellar performance here, alongside some other incredible talent. It can be a little tough to follow but the climax absolutely delivers and it sends shivers down your spine when you realize that this is based on a real adventure. Not one of the year’s best movies but definitely worth checking out in theaters.