This weekend, the trend was sequels for me. After catching Hotel Transylvania 2, I headed over to catch the sequel to last year’s Maze Runner. I enjoyed the original, more than a lot of recent young adult novel adaptations, so I had high expectations for the sequel. I haven’t read the books, so this review is completely independent of that, judging this movie completely on its own merits.

In the first Maze Runner, our hero Thomas (Dylan O’Brien) wakes up in a giant maze, along with a group of boys who have been trying to survive in this experiment of sorts. In the end, it turns out that there was a global catastrophe called “the flare,” which killed almost everybody and unleashed this virus which turns people into zombie-like beings called Cranks (which is a horrible name). The kids in the maze were supposedly somehow immune to this virus. In retrospect, I’m not quite sure why they had to test these kids in the Maze. In the sequel, they just experiment on their blood to find out why some people are immune. So the concept of the maze is a little baffling, considering they dropped the kids off, just to bring them back.

Anyways. In The Scorch Trials, our group of survivors find out that the people that rescued them in the finale of the first film may not be the good guys after all and they soon find themselves escaping into “the scorch,” a desert wasteland inhabited by the Cranks and a few groups of ragtag survivors.

Along with O’Brien, the cast includes Ki Hong Lee, Kaya Scodelario, Thomas Brodie-Sangster, Dexter Darden, Alexander Flores, and Jacob Lofland. Patricia Clarkson and Aidan Gillen join us as the heads of this mysterious group called WCKD, while Giancarlo Esposito, Barry Pepper, and Lili Taylor join as survivors in the Scorch who might help or hinder their progress. 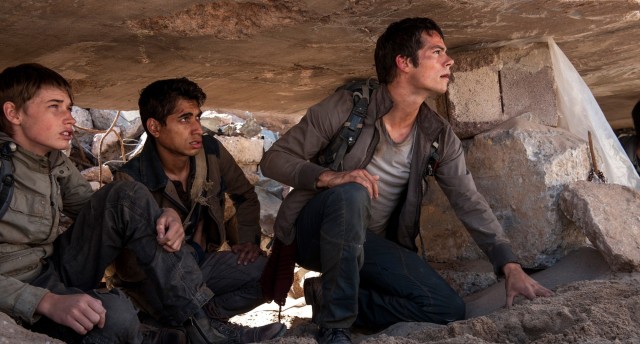 Like the first Maze Runner, there’s an emphasis on action here and most of it is pulled off nicely, including some great chase scenes through the dystopian future of “the scorch.” While I hate the name “cranks,” they were a suitably intimidating enemy. There were also some intense action scenes in the film’s climax that were pretty cool.

Let’s start with the story. Firstly, they don’t explain a thing from the first movie, so if you haven’t seen the original Maze Runner, it’s required viewing. And I (even having seen the first one) forgot all the little details, so there were quite a few moments that I was lost.

I have a feeling though, that even if you remembered all those details, you’d still be confused. I have a pretty good gauge on book adaptations when I can tell something has been left out. Here, there are details and motivations that are absent, that hopefully exist in the books. The “villains,” this group called WCKD, have a morally grey agenda which was interesting for a moment, since it made you really question who was right and who was wrong. That would’ve been fascinating. But then these villains started massacring people and it made them into generic villains once again.

In fact, most of the story is generic. Stop me if you’ve heard this one. A young rebel is part of a system that they distrust, so they leave that system and find a group of rebels to fight alongside, ultimately facing off in a huge globespanning confrontation (see The Hunger Games, Divergent, The Giver, I Am Number Four, The Mortal Instruments). I thought the original Maze Runner was interesting but this sequel gave in to cliched storylines and is now completely unengaging.

But let’s pretend the story was fine. How was the execution?

Aside from the few standout action scenes, the movie was poorly paced. It slowed to a grinding halt quite a few times and even had a terrible false ending that had me literally sigh when I realized the movie wasn’t actually over (just to have the movie end two minutes later instead). It was too long and spent its runtime on the wrong things.

Here’s the big question when it comes to book-to-movie adaptations. The book might’ve had more plotlines that would’ve made this whole thing made sense. Characters might’ve had meaningful conversations. Maybe there were entire characters missing from the movie. I don’t know. But when it comes to the film, you can’t translate exactly. You need to cut, you need to trim, but you also need to understand what made the book succeed. Here, there were characters that they should’ve cut completely because they weren’t given the time necessary to care about them. Some of these adaptations fail because they try to please both audiences. Maze Runner: The Scorch Trials should’ve cut time and characters in order to keep the heart of what the movie was supposed to be about. As of right now, I feel like it failed to both the fans of the books and non-fans alike.

While the first film was engaging and simple, this film became a convoluted and confusing mess. If you think too much about the “why” of the whole thing, it will unravel completely. They should’ve cut the film down a bit (or cut differently maybe) because the movie felt too long and unnecessarily so. O’Brien is fine as our lead, but no one else really got screentime to develop. The action scenes were the highlight, just like the first film, so that is really the only reason to see this movie, if you can enjoy them without understanding the context of what exactly is happening. I wouldn’t recommend The Scorch Trials, unless you can catch it for free on Netflix one day.