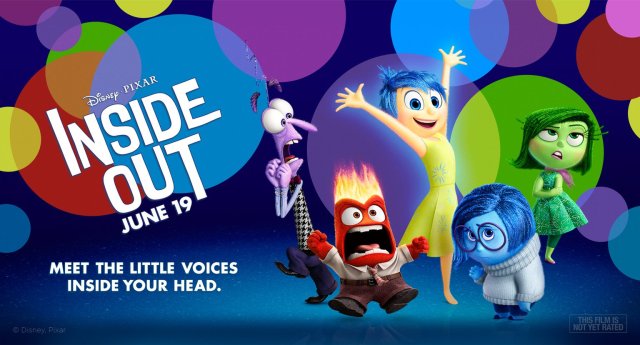 Pixar is usually synonymous with “incredible.” They’ve got a great track record of films, with the only exceptions (for me) being Cars, Cars 2, and Brave. Everything else I felt was pretty incredible, to say the least. So when the trailers came out for Inside Out, I was intrigued. I didn’t think it would be a stellar movie, so I was a little concerned.

But here’s the thing. There is so much more going on with Inside Out than the trailers would lead you to believe. They weren’t bad trailers, they just didn’t really go into the actual storyline, so most of the twists and turns were surprises. But did it succeed?

We meet an 11-year-old girl named Riley, whose family is about to be uprooted from their smalltown Midwest life and relocate to San Francisco. As we see this story unfold, we get to meet her emotions and see what’s happening in her head. We have Joy (Amy Poehler), Fear (Bill Hader), Disgust (Mindy Kaling), Anger (Lewis Black), and Sadness (Phyllis Smith). Like the trailers, I don’t want to give away the story.

Pixar has done it again.

This movie is incredible and will likely crack my top 10 movies of this year. It truly has something for everyone. The kids will enjoy the vivid and gorgeous visual effects, the hilarious jokes, and the rare (but incredible) action sequences. Adults though… will get much much more from this movie.

It’s fitting that a movie about emotions packs such a punch. I cried on several occasions, usually from pure joy. While the present day story is about moving and making new friends and struggling with self-identity, there is a huge component of the story that is about Riley’s past memories. It’s in those moments that you’ll likely get choked up. It had me thinking about my own life, my own memories, and moments that I wish I could relive. It’s a smart movie that has you watching this young girl, but it’s really about your own journey and how you handled tragedy and crisis and those emotional peaks and valleys in your own life.

It’s also really smart how they tackled thought in general. There are a lot of great moments involving a literal train of thought or imagination or what happens to memories that we just… forget. It’s beautiful and clever and exceptionally executed. This director (Pete Doctor) directed Up and Monsters Inc., in addition to writing Toy Story, Toy Story 2, and WALL-E. If you liked his previous outings, you can be pretty confident that you’ll love Inside Out as well.

In terms of voice talent, they all knock it out of the park. Out of the all the voices, most tend to back off a bit instead of going the route of their usual personalities. Amy Poehler does great and reels it back, letting Hader and Black carry the comedic weight. Mindy Kaling and Phyllis Smith (both from The Office) also do spectacular work. I was surprised by Richard Kind as a character that I won’t spoil, but his performance here was fantastic.

The only thing I can even think of to put here… is that kids might get distracted or lose focus during the emotional climax, since it reels back the effects and action and focuses on characters. I noticed a few kids got fidgety in the theaters and babies started crying. It’s not a deterrent of the movie but rather a thought if you were thinking of taking your kids. They may just need some tending to during that finale.

Also, if you have a fear of clowns, there’s a sequence that might give you nightmares, but that’s the intended consequence.

This movie is a genius creation. It’s cleverly written, beautifully executed, and able to appeal to both kids and adults alike. Adults will get the most out of this, though, as it makes you ponder your own life. It’s full of nostalgia, interesting metaphors, and enough emotion to likely have you reaching for a tissue during the final act. This isn’t just Pixar’s best movie in years, this is likely one of Pixar’s best movies ever.

1 Response to Review: Inside Out