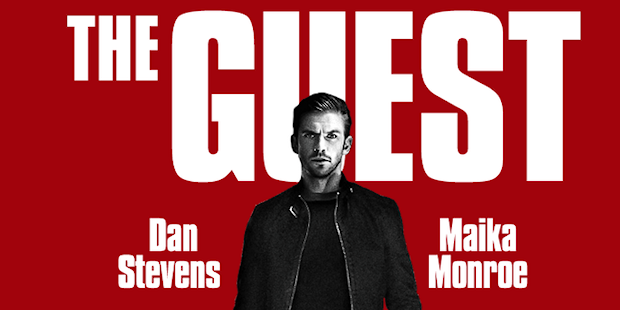 I’ve heard people talk about The Guest but somehow I missed it in theaters (or it didn’t release around me). So I was at the Redbox kiosk and browsing through the movies and it caught my attention. I knew zero about it, I hadn’t seen a trailer, and I had no expectations.

The gist. Dan Stevens stars as a war veteran who returns stateside and his first stop is to visit the family of one of his fallen brothers. He is invited to stay and eventually becomes quite close with the family (Sheila Kelley, Leland Orser, Brendan Meyer, and Maika Monroe). David, played by Stevens, begins to help out all the family members with their issues and is quite the hero, but things begin to take a strange turn as bodies begin to pile up in the small town. Is David the hero? Or the villain?

Director Adam Wingard creates something really interesting here. Though it’s set in current day, they use this 80s-like synth music and bright neon colors to evoke a sense of nostalgia. It feels almost like a horror movie from the 80s but you’re not sure if it’s a horror movie. There’s action scenes, there’s suspense, there’s some downright thriller moments, but all of it is emphasized by this haunting soundtrack. And visually, the colors are gorgeous.

In terms of tone, this movie definitely keeps you guessing on what sort of movie it is. You never know how to really feel about David. This movie is fascinating in that it defies conventional genres.

As the lead character David, Dan Stevens is fantastic. He’s a British actor that I’ve never seen before but is probably most well-known for Downton Abbey. He managed to lose the accent and pick up a Southern drawl instead. He plays it perfectly as some scenes he’s charismatic and likeable, but then the next second will be threatening. And his action scenes are pretty incredible, rivaling what we saw from John Wick this year. For his first big foray into action, he’s got some potential.

If you go into this wanting action, you may be a little letdown. There are some key moments but it’s much more of a thriller than an action movie. The action is great but it’s sparse, so don’t expect big action setpieces.

The Guest is unlike anything I’ve seen in a long time. It’s mesh of action and thriller genres keep you on your toes, while the music and vibrant colors harken back to 80s horror movies. Dan Stevens makes an incredible splash in his first big movie role (at least here in the U.S.) while the supporting cast all do their job respectively. While the action isn’t abundant, it’s great when it does happen and result in some very memorable moments.