Now, Chris Hemsworth has a spotted history. For every Rush, there’s a Snow White and the Huntsman. So when the trailer for Blackhat came out, I was hesitant. Could Hemsworth pull off an American accent while also playing a computer hacker? Could Michael Mann (Heat, Collateral) deliver another solid action film?

Chris Hemsworth stars as Nick Hathaway, a former hacker who is serving time in prison. When another hacker begins to cause major catastrophes, the US government needs to use Hathaway to decode his attacks and save the day. Viola Davis stars as his government liaison, while Leehom Wang and Wei Tang star as two Chinese agents who used to work with Hathaway before he was locked up.

There is one good fight scene in a restaurant that lasts ~30 seconds and one other shootout that has an explosive opening. These moments were awesome.

I thought Taken 3 was the worst we could get, after I gave it a 1-star rating. I feel like I should go back and bump up to a 2-star after seeing Blackhat.

I went in with low expectations already. What I got though was an absolute trainwreck. The worst offense this movie made is that it’s incredibly boring, yet Michael Mann somehow pushed this movie to two and a half hours. For some reason, Mann is obsessed with letting characters just sit. And stare. It was laughable, after ten seconds of silence just sitting there. Nearly three hours of people sitting awkwardly around.

And then there’s the characters. Hemsworth is fine though his accent was kind of strange. His supporting cast though is atrocious. Viola Davis delivers some cringeworthy lines and serves absolutely zero function in the story. And then Wei Tang serves the role as this love interest that is unbelievable. You don’t sense any chemistry and we don’t care about her at all. 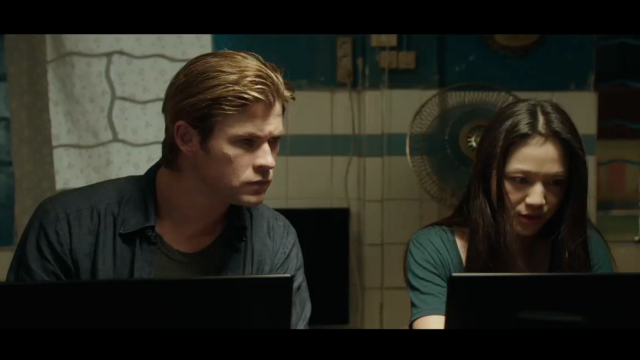 You can sense the chemistry.

For nearly three hours, I sat watching people I didn’t like just sit and stare.

There’s also some weird audio glitches. One whole scene was almost so quiet that I couldn’t tell what the characters were saying, like some volume switch was turned down.

I haven’t seen a movie this offensive in a long time. Offensive in that Michael Mann thought someone would like this. When you look back at something like Collateral, which is suspenseful and vibrant… It makes you wonder what the hell happened here.

Don’t ever see this. Don’t reward this sort of behavior.

When I walked out of the theater, I said out loud, “I need to tell people to not see this movie. That’s why God put me on this Earth.”