(Review) The Hobbit: The Battle of Five Armies

The Hobbit: The Battle of Five Armies

People were unsure when it was announced that The Hobbit would be split up into three movies. As a book, it’s smaller than all of the Lord of the Rings books. Was there enough content? Would it be worthwhile?

My initial thought was “The more, the better.” I was just excited to see more of this world on-screen. The Hobbit: An Unexpected Journey was a little underwhelming, especially with the 48 frames-per-second gimmick. I was upset that so much of the movie was CGI (especially the main villains of the movie) when the Lord of the Rings films had actors in makeup and prosthetics. It made the battles feel more artificial. The Hobbit: The Desolation of Smaug was a little better, as Smaug himself was the highlight of the movie.

So was The Hobbit: The Battle of Five Armies a solid way to end the franchise or was it also a bit of a letdown?

The gist. The Hobbit films are prequels to the Lord of the Rings films. They feature Martin Freeman as Bilbo Baggins, an unsuspecting halfling who gets brought on an adventure with a ragtag group of dwarves to reclaim their home from the dragon Smaug (voiced by Benedict Cumberbatch). When The Battle of Five Armies begins, Smaug has been awoken and is attacking the city of Laketown, whose only defender seems to be the archer Bard (Luke Evans). While Laketown is in peril, Thorin (Richard Armitage) begins to barricade his fellow dwarves inside the mountainous city they’ve reclaimed. An army of orcs marches to the mountain, as does an army of woodland elves (including Lee Pace’s Thranduil and Orlando Bloom’s Legolas). An all-out war is about to begin. 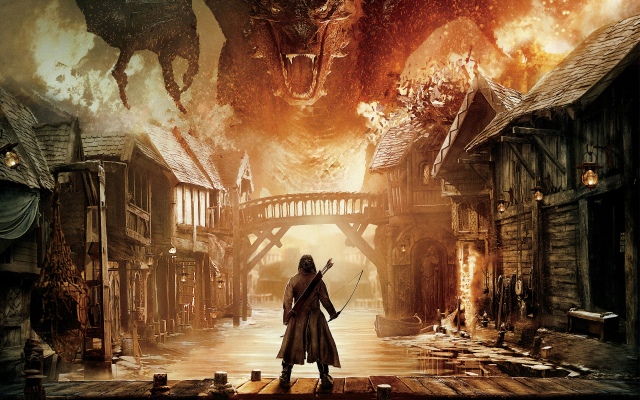 The opening moments featuring Smaug attacking Laketown is what I imagined the climax of Desolation of Smaug would’ve been, so it’s a big opener. The effects are gorgeous and Smaug himself is truly incredible. I still kind of wish this had been the finale of the previous film though.

Freeman as Bilbo and Armitage as Thorin Oakenshield carry the weight of this film. Freeman reminds us why he was chosen for this role, as he has a perfect blend of halfling innocence and absolute selflessness. Thorin gets to showcase a new side here, as the gold and treasure of the mountain almost become like an addiction to him, reacting much the way that Gollum acts around the ring. It gives Armitage some flexibility and range here, though the finale does give him some moments of action as well.

Speaking of action, that’s really what people want from this movie. A battle of five armies. The title itself tells you that it’s going to be a badass movie. And does it deliver? Yes. It builds perfectly, though the other battles in previous films kind of tell you how this is going to go. There’s a standard formula of (x) vs (y) and when (y) is almost beaten, then (z) shows up to turn the tides. Repeat as needed. The action scenes are awesome though, with some really creative battles that really expand upon the relatively little source material, considering the whole battle was only a chapter or two in the book. They also have some really cool creature designs, both twists on old favorites and then some interesting new types of creatures that didn’t even appear in the book at all.

While the battles are fun to watch, I still have the same complaint that everything looks blatantly computer-generated. It takes away some of that visceral feeling from the originals. When the Uruk-Hai were swarming to defeat Sean Bean’s Boromir, those were real guys in costume. When Helm’s Deep was being swarmed by orcs, those were real people (mostly). Here, I couldn’t even spot real actors. It all looked like a videogame to me. When Azog the Defiler, the greatest Uruk-Hai to live, shows up to wreak havoc, it lacked any sort of punch because he looked absolutely fake.

Even with characters that were played by real actors (mostly notably the company of dwarves), I didn’t feel as connected to them as I did with the Fellowship. As the credits rolled, I still couldn’t tell you which dwarf was which. A few stood out, such as the brothers Kili and Fili, but most of them are just wandering around with nothing to do. That lessened the emotional impact of the ending of the film, which is something (I felt) Lord of the Rings did right. It gave you a satisfying ending, one it deserved after that long and epic journey. Here, our ending basically served to lead into Lord of the Rings.

It’s hard to compare to Lord of the Rings because those movies are absolute perfection. Part of me wants to say that maybe that bar is set too high, but when it is the same director and the same world and the same talent, shouldn’t the bar be set that high? If anyone could do it better, you’d think it would be the guy who brought this franchise to life in the first place. Martin Freeman and Richard Armitage deliver great performances here and the battle sequences are amazingly fun to watch, though the lack of physical actors in these situations is a bit of a deterrent and disappointment (I did talk to people however that thought they were real, so maybe I’m too critical). This is a successful finale to this trilogy but still can’t compete with the trilogy that preceded it.