Shadow of Mordor. Played on Playstation 4.

I’m a huge Tolkien nerd and when I saw the first trailer for Shadow of Mordor, I got immensely excited. It doesn’t take place during the same time as the Lord of the Rings films, which puts it at somewhat of an advantage, as so many games have already come out that play into the events that unfold there.

The gist. Shadow of Mordor takes place in the time between The Hobbit films and the Lord of the Rings films. Sauron is regaining power and has lieutenants roaming Middle-Earth preparing for his return. Powerful orcs (called Uruk-Hai, or just uruks) have set up strongholds throughout the region and follow the lead of their mighty Warchiefs. We meet a ranger named Talion who is murdered along with his family, by some of Sauron’s lieutenants. Talion is somehow resurrected and finds himself tied to the ghost of an elf. Talion is able to die and come back to life, while also tapping into his new “wraith” to utterly destroy any uruks. Together, Talion and his new partner decide to simultaneously destroy the uruk army from inside and also to kill all three of Sauron’s lieutenants. 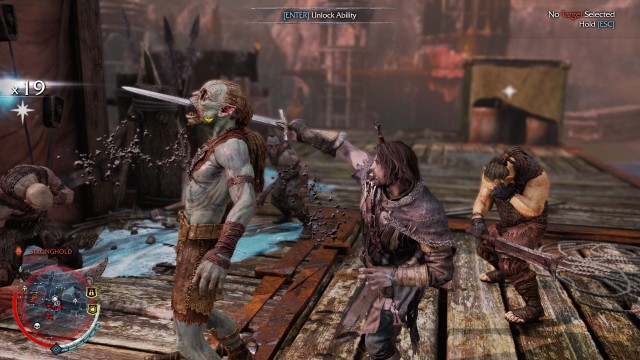 The game has essentially three styles. Early on, you rely on stealth. It feels very much like Rocksteady’s Arkham video games, with a dash of Assassin’s Creed. You sneak through uruk encampments and kill them silently and quickly. You also have a trusty bow and arrow that you can use to pick off enemies from a distance, including a time-slowing mechanism to get easier head-shots. And when you get strong enough, you use swordplay to get in the trenches and hack and slash, using Arkham-like combat to counter and kill your opponents.

What makes Shadow of Mordor unique is something called the “nemesis system.” There is a hierarchy of uruks, with their Warchiefs at the top. Your goal is to kill or replace these Warchiefs and you can use the other uruks to do this. You can play them against each other, cause riots, or snuggle up to each other and try to become a Warchief’s bodyguard. There are a lot of options.

All these mechanics come together beautifully.

The story starts off very simply. You meet some big bad monsters and then you set off to kill them. And the journey to do that is fantastic. When it comes to combat, the mix of different styles is seamless and engaging. You can immediately pick off two uruks with your bow, leap down and stealthily shank one, and then engage in a 1-on-20 brawl. The environment also allows some flexibility, as there are explosive barrels to shoot, wild animals to unleash, and other hazards to take advantage of. This actually adds strategy, as some enemies flourish in different circumstances, so you wouldn’t want to unleash a monster when your nearby boss gets stronger around them.

This plays into the uniqueness of the nemesis system. Each uruk captain that you run into is randomly generated, both by name and look as well as their strengths and weaknesses. And if an unnamed uruk kills you, they become a captain and suddenly gain all this personality. I had an archer kill me, who became an uruk named Pug Metal-Beard and wore a literally metal beard. I killed him once and then he found me again, with giant scars across his face. It’s awesome to see this whole origin story unfold and the chills when you get when you see them again. And the fact that only I had this interaction and this experience is really cool. Each captain has a list of strengths and weaknesses for you to exploit, which include things like invulnerability to different types of attacks and things that they hate or fear. You need to interrogate other uruks to get this information, so that you know a captain is immune to stealth before you try to sneak up on him and find out the hard way. 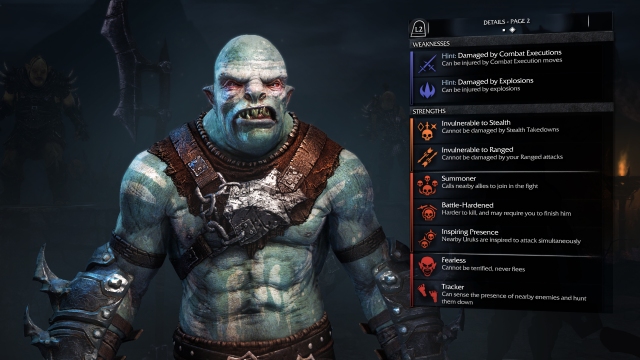 This all takes place in two open worlds, one the dark and terrifying lands near the Black Gate into Mordor and the other a lush and green jungle. Your goals are scattered throughout these maps and you’re able to do them at your leisure. There are fast travel locations, plus various ways to move around the map much quicker than by running. The locations all look stunning, though sometimes in a terrifying way. As you’re sneaking through an uruk fortress lined with skulls, you can’t help but be both mesmerized and haunted by it.

I can’t emphasize enough though how fun the combat is, because it always comes back to that. The combos are easy, the kills look brutal, and you feel like an absolute badass the whole time.

It’s fun to hack and slash, but the nemesis system makes it worth doing. You brand a few orcs and use them to cause infighting which leads to a Warchief now facing a riot. You can manipulate the strings and make your chosen captains rise through the ranks, to eventually face off against Sauron’s lieutenants.

My only complaint is that it almost got too easy at about the halfway point. I hadn’t even left the first area yet and I was already fully leveled-up, which made the second half a little easy. Now, don’t get me wrong, I still had an absolute blast, but it definitely wasn’t very challenging.

Shadow of Mordor is an incredible experience. Fun mindless brutal violence but a complex and strategic system in the background that you must watch closely. The story may seem simple but that’s only in contrast to the fun you’ll have roaming the wilds of Mordor and killing literally thousands of Uruk-Hais. The mechanics all work together perfectly and this was one of the most enjoyable gaming experiences I’ve had in years.