When I ask people younger than me if they know who Michael Keaton is, they mostly respond with no. The occasional answer might include “Was he the Batman guy?” So the movie Birdman is kind of self-referential. Does it work?

The gist is that Riggan Thomas (Keaton) used to play an iconic superhero named Birdman in an old series of movies and he’s now trying to become relevant again by writing, directing, and starring in a stageplay. He’s taking care of his addict daughter (Emma Stone) and attempting to listen to the advice of his manager/lawyer (Zach Galifianakis). To make his play successful, he’s brought in an aspiring starlet (Naomi Watts) and her charismatic and popular boyfriend (Edward Norton). The movie gets interesting when you start to see that Riggan is either crazy or somehow actually has superpowers.

This movie is art. That means that some people will love it and others won’t get it. I fell on the side of loving it. Most of this falls on director Alejandro Gonzalez Inarritu, whose only other film I’ve seen is Babel. He is a master here, creating something special here on multiple levels. 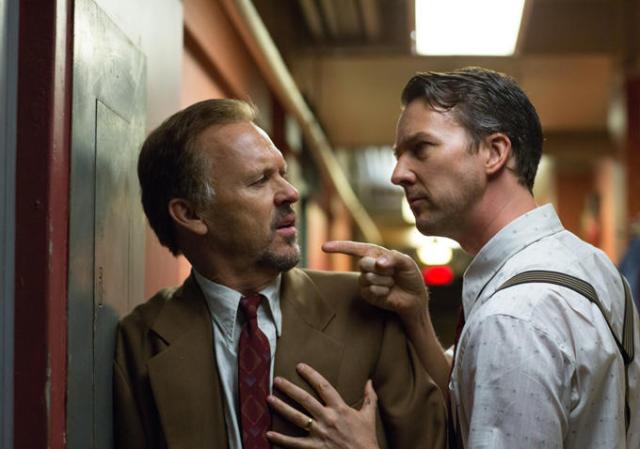 On a basic level, he gets some incredible performances from his cast. Keaton is fantastic here but I don’t know if it’s enough to truly make him a superstar again. His excellent supporting cast really steals the show. Most enjoyable was an interesting turn from Edward Norton that might result in his best performance since Fight Club. In another self-referential move, Norton plays an incredibly hard to work with actor, which resembles what we’ve heard about Norton in real life. He’s dynamic to watch though and I could see him getting a nod for Best Supporting Actor.

Beyond the performances, Inarritu plays with this idea of Riggan being an actual superhero (or maybe it’s just in his mind) by giving us small glimpses into what he’s able to do, sometimes with the voice of Birdman taunting Riggan, like a strange schizophrenic superhero. It’s fascinating to watch and some of the special effects are incredible.

While most of the cast is excellent, Emma Stone was the weakest link. She had one monologue that was convincing but the rest of her performance didn’t feel in sync with the other performers. Some moments with her and Norton felt forced and insincere.

I also mentioned that some people will dislike it. It’s all over the place in terms of story and sometimes you can’t tell what’s real and what’s not, so it may upset some viewers that it doesn’t really explain itself sometimes. As an abstract character piece though, it succeeds wholeheartedly.

Birdman is unfortunately only in limited release, but if you can find a theater near you that is playing it, it’s an absolute treasure to watch. Keaton and Norton give outstanding performances, with their scenes together being breathtaking. Visually the movie is gorgeous and director Alejandro Gonzalez Inarritu pulls off a fantastic feat here. Not everyone will appreciate what this movie does, but I think it’s one of the best films of the year so far.