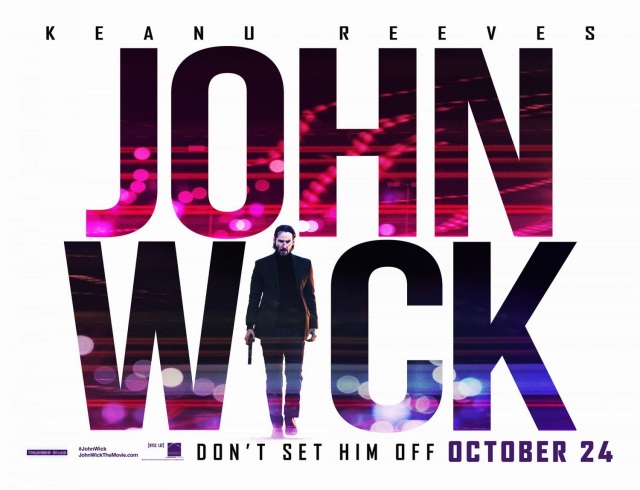 Keanu is back. He’s been somewhat of a joke recently, with his career being a bit tumultuous following The Matrix. This new revenge film John Wick has been making waves though… Is it true? Is Keanu back?

In the opening moments, we see John Wick (Keanu Reeves) lose his wife. She’s sick and knows she doesn’t have much time left, so she gives him a small dog to comfort him and give him something to love. When a trio of thugs invade his home and kill his dog, we learn that John Wick used to be one of the world’s most renowned killers and now he’s going to tap back into that world in order to get revenge and kill the men who did this, regardless of the body count.

Willem Dafoe stars as an old friend of Wick’s who specializes in sniper rifles, while Ian McShane runs a hotel where assassins and killers can stay in a sort of safe zone from other killers. Adrianne Palicki shows up as an assassin who doesn’t care about this rule.

Game of Thrones regular Alfie Allen (Theon Greyjoy) is the dirtbag who kills the dog, while his father (Michael Nyqvist) has to clean up his mess.

This movie works on most levels. Keanu is charismatic and is probably the only person who could’ve made some of this dialogue work. It’s cheesy and over-dramatic but he commits 110% to it and it works. He not only shows some serious acting chops here but reminds us that he is an action star. This style of action, coined gun-fu, mixes all sorts of guns with old school martial arts and it’s fascinating to watch. And most of it is seamless, instead of typical shaky-cam where you can’t tell what’s happening. The action is incredible. And there’s plenty of action scenes to give you what you want. I even thought the final scene happened and it turns out there were another few crazy action scenes even after that. If you want fun action, this movie will not disappoint.

In terms of story, it’s simple. This tragic incident in the opening moments trigger a whole movie’s worth of Keanu taking out people any way he can. But in those opening moments, we get enough context to understand why John Wick is doing this and we root for him the whole way. The mob boss (Nyqvist) is also an interesting villain, as he fears Wick and knows that his son messed up royally.

There’s also some interesting “world building” at play. This isn’t our world, but instead a version of our reality where killers and assassins have secret rules. Maybe it is our reality, we just don’t know it… Now I’m terrified. Anyways. This movie gives us a cool look at an interesting spin on crime and those involved with crime. The directors play on colors and shadows and it’s a visually stunning film.

We know that Keanu is going to kick ass and the action is incredible but sometimes the film makes him out to be too good or the villains too stupid, like moments when they just run at him while he guns them down. The suspension of disbelief is high for this movie.

This movie won’t win awards but it’s one of the most entertaining films of the year. Keanu is a superstar here and this gun-fu action had me on the edge of my seat. The world they’ve created is an interesting one and visually it pops off the screen. If you enjoy action and want a good and satisfying revenge film, John Wick is a no-brainer.