Review: If I Stay 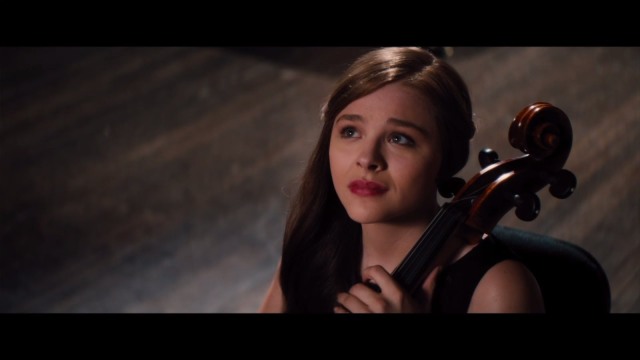 The summer started with the cryfest The Fault in Our Stars (review here) and it’s ending with a similar vibed film If I Stay. Going into both, you know you’re going to cry like a baby. The Fault in Our Stars was able to give us a deep look at young love that was ended with tragedy in a way that would resonate with most viewers. Is If I Stay able to do the same?

The gist is that Chloe Grace Moretz (Kick-Ass, Carrie) stars as Mia, a high school cellist who dreams of playing for the Julliard school of music but falls for a punk rock vocalist (Jamie Blackley), who teaches her to live a little. Now, cut to a year and a half later. The movie begins with a car accident that sends Mia (Moretz) and her family all to the hospital. Mia is able to watch this all unfold through an out-of-body experience as she watches those that she cares about struggle with her impending death. The movie is mostly told in flashbacks, to give us significance to who these people are and why they mean so much to her. Her parents are played by Mireille Enos and Joshua Leonard and Stacy Keach stars her grandfather.

You go into this movie knowing that it’s going to make you cry. But is it deserved? Does it work?

Yes. It takes some time however. The car accident occurs in the very beginning of the movie and so we’re not attached to any of these characters and the movie doesn’t really recognize that, giving us lingering shots that would have mattered more if it occurred later in the film. But once you get to know these characters via flashbacks, the impact of this accident becomes apparent. And this movie pulls no punches, it goes straight for the throat.

Chloe Grace Moretz does a suitable job as the lead Mia, likewise with relative newcomer Jamie Blackley as the “rebel without a cause” Adam. It’s the supporting cast that really cements this movie though. Mireille Enos (Sabotage, The Killing) and Joshua Leonard star as Mia’s parents and they give an absolutely real performance in a way that parents aren’t often portrayed. A majority of their screentime is via flashback but they are fully fleshed out and realized characters, which makes the accident even more traumatic for Mia. The best scene in the movie, hands down, belongs to Stacy Keach though, as Mia’s grandfather who gives a riveting one-sided conversation to a near-death Mia about her decision to stay or to go. I ugly cried through the whole thing (luckily the theater was pretty empty).

This movie will draw obvious comparisons to The Fault in Our Stars and it’s justified. The weakest part of If I Stay is the former movie’s strength. In The Fault in Our Stars, the relationship between Shailene Woodley and Ansel Elgort was the strongest part of the film, with two incredible performances. They found love in the midst of personal tragedies and used it to make their relationship stronger. In If I Stay, it’s a much more cliche story of a shy and timid girl who somehow gets the attention of the mysterious musician. I wish this had focused more on family and what reasons she has to stay, other than the cliched teen romance aspect.

The movie’s structure also is a bit of a disadvantage, as I kind of referenced in the “What works?” section. This really devastating moment happens and we have no connection with these characters yet. There wasn’t really an alternative, as the movie’s whole point is that it’s her in limbo trying to decide if she stays or goes. The majority of the film needs to be dedicated to this time. So there isn’t a solution, that moment just didn’t carry a lot of weight.

This movie is a mixed bag. Yes, it’ll hit you in the gut and make you cry every tear you’ve been holding back. But it’s also full of cliches and unoriginal characters thrown into a situation that would have anyone tearing up. The story is unique but the world is populated with characters we’ve seen dozens of times already. The Fault in Our Stars did it better, as it had the advantage of two more unique and interesting characters… and a story that gave us time to get invested in them. I do applaud the work here with the parents and grandparents, but they were relegated to minimal flashbacks. Both are decent tearjerkers but if I’d only recommend one, it’d go to The Fault in Our Stars.