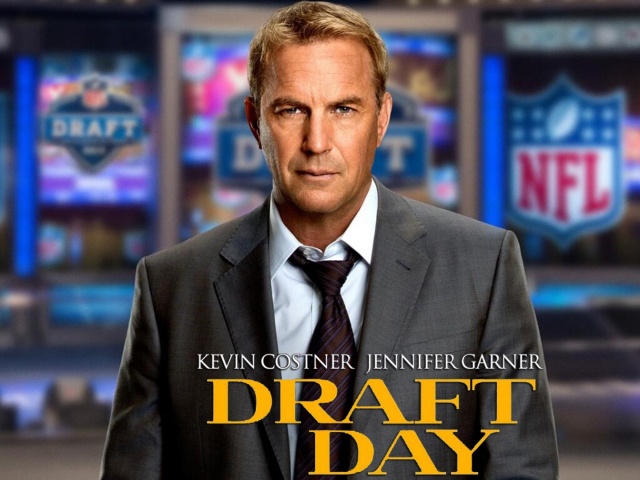 The only things I know about football are what I learned from playing Madden ’06. But I could’ve said the same about Moneyball and that movie managed to get me to understand and appreciate baseball, so maybe Draft Day would have the same sort of effect. Did it?

The gist is that Kevin Costner stars as the General Manager for the Cleveland Browns, just a few hours before the annual draft begins, when a team picks up players from college football. One of his assistants happens to also be his lover (Jennifer Garner) and she just dropped the bomb that she’s pregnant. To top it all of, his father died just a week before, so will he be able to keep his head and make smart decisions for the future of this team? Denis Leary stars as the coach of the team who often disagrees with the GM’s decisions. Chadwick Boseman, Arian Foster, and Josh Pence all star as athletes who are trying to get a spot on the Cleveland roster.

It’s hard to not compare this movie to Moneyball, as it features a similar throughline. I’d say that this movie gave a better look at Costner’s character than what Moneyball gave us with Brad Pitt’s character. Maybe it’s because I lost my own father a few years back but this movie managed to bring me to tears, in the guise of a sports film. It was emotional and Costner gave a brilliant performance.

Out of the three potential athletes that we learn about, Chadwick Boseman gives the best performance as Vontae Mack. I never caught 42 but he was incredible here. Foster and Pence give good performances but Boseman was an emotional cornerstone of the film.

This movie keeps a few secrets from us, so it’s surprisingly suspenseful, as we don’t always know what Costner is going to do next. The time limit of draft selection gives the film an inherit sense of suspense as well, constantly ticking down. And while a lot of this movie happens over phone calls, the movie does some clever things with transitions and effects that make it almost seem like they’re in the same place, as opposed to rigid splitscreen dynamics. Director Ivan Reitman knocked it out of the park (wrong sports metaphor?).

At the end of the film, I was satisfied. It was emotional yet hilarious and taught me a lot about a subject I knew nothing about. But it made me care about it, which goes even a step beyond.

Very little. Some could argue that other supporting characters such as Garner and Leary don’t get much to do (and we don’t learn much about them) but I’m okay with that, as this is really Costner’s film.

This is my first 5-star rating for the year, aside from Her which technically released in 2013. Costner delivers an incredible performance in one of Ivan Reitman’s best films. It hit all the right notes and I loved every minute of it.