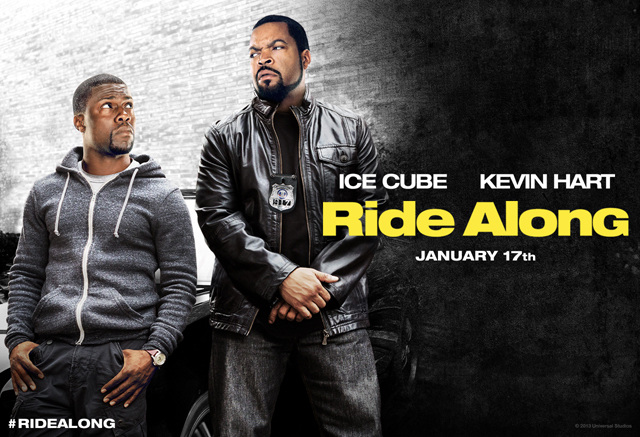 I’m probably in the minority that I am more familiar with Kevin Hart than I am with Ice Cube. I’ve been a fan of his standup for a long time. So when I saw trailers for Ride Along, I saw potential. It’s really Hart’s first “name on the poster” movie, so I was curious if he could hold a movie up.

The gist. Hart stars as Ben Barber, an aspiring police officer who spends most of his free time playing video games under the moniker “Black Hammer.” His girlfriend wants to get married, but Ben must first convince her brother (Ice Cube) that he’s worthy. Ice Cube is a loner police officer who takes Hart on a ride along for one day. What begins as a day of trying to scare him away, Cube begins to realize something more sinister is stewing. John Leguizamo and Bryan Callen star as Ice Cube’s police buddies.

Kevin Hart is the standout here, delivering some incredible laughs. He fully commits, especially with some physical gags. It can be a little tricky to understand him, when his voice gets high, but that’s part of the charm I think.

From the opening credits, I knew this movie wasn’t going to be anything special. Ice Cube was spitting out horrible one-liners from the get-go and the effects were ridiculous and over-the-top. Even Kevin Hart, fully committing to it, wasn’t enough to outbalance some ridiculous work by Ice Cube, John Leguizamo, and Bryan Callen.

In general, this movie is just forgettable. The next morning, I’ve already struggled to remember what happened. The jokes were corny, the action subpar (the opening credit action sequence was horrible), and it was generally a waste of time, so don’t waste your money.

If you like Kevin Hart, who is the only saving grace in this film, check out his standup specials. He’s hilarious here, but the time in between his jokes are spent in misery. It’s not bad, like Movie 43 bad, but it’s just forgettable. Right now, with Frozen, Saving Mr. Banks, The Wolf of Wall Street, and Her in theaters still, there’s no reason to spend your money on Ride Along.