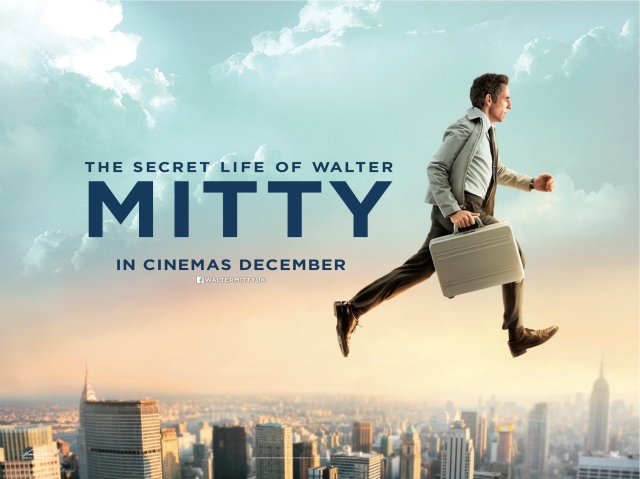 The Secret Life of Walter Mitty.

I don’t often talk about expectations because usually I can put them aside and see a movie for what it is. That was hard with The Secret Life of Walter Mitty because my expectations were incredibly high.

And the reason is the trailer below.

This trailer is hands down one of the best trailers I’ve ever seen. The music, the footage, the lack of dialogue until the final moment… I loved it. I literally thought “This could be my new favorite movie.” It reminded me of my current number one favorite movie Stranger Than Fiction and I love that vibe.

So… Could The Secret Life of Walter Mitty meet those incredibly high expectations?

Ben Stiller both stars and directs this film about the average guy Walter Mitty, who develops negatives for Life magazine. Life has been bought and is going to be transformed into an online magazine so Walter is in charge of developing the last cover photo, taken by star photographer Sean O’Connell (Sean Penn). However, the negative isn’t there. This prompts a globetrotting adventure that causes Mitty to leave his comfort zone and begin living the life he’s always dreamed of.

Kristin Wiig stars as Cheryl, a new woman at work that Walter has developed a crush on. He’s found her profile on eHarmony but is unable to “wink” at her and he has a few hilarious encounters with eHarmony technical support (Patton Oswalt).

Casting is spot-on. Stiller is given a nice chance to play the average guy here. While he’s done some incredible character work (most notably Zoolander and Dodgeball), he also manages to find some great moments here, as we see Walter Mitty daydream about what his life could be (and maybe starts to actually become). Patton Oswalt’s role is primarily over the phone but he steals every scene he’s (heard) in.

The film is absolutely gorgeous. The adventure portions of the movie take place in Greenland, Iceland, and in the Himalayas. There are absolutely breathtaking shots here and it’s a nice change of scenery.

The score for the film was incredible, and paired with these breathtaking establishing shots, gave some awe-inspiring moments.

In terms of story, it’s a nice message. It’s an inspirational call-to-action and it might have that potential to kickstart someone’s life after viewing. When I looked up the trailer, almost all the comments were along the lines of “My life is changed” or “My life began today,” things like that. That’s great but…

This movie didn’t impact me the way I wanted. My expectations were that my life would be changed, and maybe that was my fault for going in with (unmeetable) high standards. I liked the movie, as you’ll see by my final score, but it didn’t have that moment where it all comes together. The moment at the end of the movie where his whole journey pays off didn’t really strike the right chords for me and I left the theater unaffected.

Let me try to come up with a reason. I blame the trailer: the impeccable amazing trailer that still gives me goosebumps (and has triggered a spree of listening to Of Monsters and Men nonstop). The trailer is amazing because it features all the moments in the movie that should have made made my stomach drop or made me get butterflies. The trailer doesn’t spoil anything, as it doesn’t even touch on the plot, but it showcases all of the most amazing moments, so I couldn’t help but anticipate during the movie. I knew he was going to jump from the helicopter into the ocean because I’ve seen it, so that huge and epic moment was stolen from me. The first half of the movie focuses on Walter’s daydreams and almost all of these daydreams were featured in the trailer, so there was no surprise.

It most movies, yes, it shows you some of those incredible moments, but the trailer for The Secret Life of Walter Mitty showed you all of them. This meant that the trailer was absolutely fantastic but it undercut the effect of the actual movie.

Also Adam Scott as the villain was fine, but his beard looked a little fake and distracted me everytime he was on-screen.

I liked this movie a lot. Like I said, it’s gorgeous. And the music was incredible. But I wanted it to be the best movie I’ve ever seen. So I didn’t enjoy it as much as I wanted because of my high expectations. If you don’t really know much about the movie or feel like you just want something fun and light-hearted and a little inspiring, you might find a lot to enjoy here. Ben Stiller knocked it out of the park as director and the supporting cast is pretty incredible too. There’s some fierce competition in theaters right now but The Secret Life of Walter Mitty might be the right choice for you.