(PS3 Review) Injustice: Gods Among Us 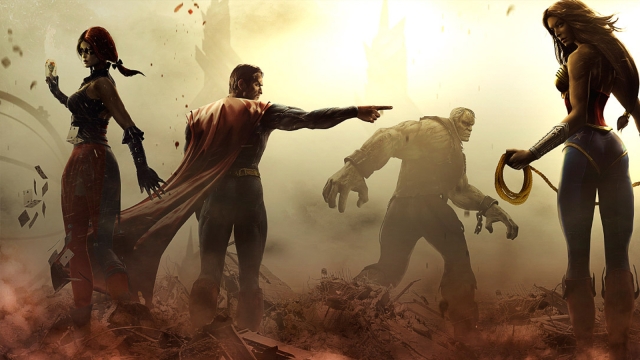 Injustice: Gods Among Us.

I’ve always been more of a Marvel guy growing up but I have to confess… Injustice: Gods Among Us looked awesome from the first moment I saw it. I was a fan of the Mortal Kombat franchise growing up and it looked like they managed to walk a fine line between the two worlds.

The gist is that heroes and villains from our world get transported to an alternate world, a world where their Superman was tricked by the Joker to kill Lois Lane and their unborn child. Yes, really. So Superman has become this fanatical harsh ruler, believing that by ruling with a heavy hand, he won’t allow anyone else to come to harm. Other heroes follow him because they’re terrified and villains follow him because he now lines up with their ideals.

This explains why heroes like Superman and Batman would fight each other, in a way that makes sense in context.

I didn’t play the online version but the storymode was surprisingly deep and had an impressive story. You play as most heroes and villains both, as the transported heroes try to find a way to escape back to their world. This lets you explore all the characters’ unique playstyles and gives you a pretty lengthy storymode as well.

This storymode was impressive. The story was interesting and unpredictable, because consequences of this parallel world don’t effect our world, so characters can die and not affect the world we know. This allows for some surprisingly brutal and unexpected moments. I was also impressed with the cinematics between battles, which actually created some really huge moments and gave me insight into the characters that I (as a Marvel fan) don’t have. They managed to make Aquaman look pretty incredible and that has to count for something.

The control scheme is much simpler than the old Mortal Kombat games I used to play, where you’d have to memorize huge strings to pull off your favorite fatality. Here, it rewards you for completing combos and you’re able to pull off these super moves pretty easily. The interactive environments are also incredibly cool, being able to utilize items in the environment to best your opponent. They still require some strategy, as they affect different areas of the arena and still require timing. You have plenty of options as to how you want to fight the battle.

Some of the heroes aren’t as intuitive to play, though I chalk that up to differing playstyles and the preferences of the player. For me, Superman was really hard to get down, since he seemed much slower than the others. Quicker characters like Aquaman and Green Arrow came much more easily to me. Not a bad thing, just something I struggled with, since it was required in the storymode to play through several battles with these characters.

This is a solid fighting game, which managed to create an actually interesting story mode, not just a tournament that you can play through. The characters are unique to each other, allowing for you to find one that suits your playstyle. The visuals are incredible, highlighted by amazing and interactive levels and really cool super moves that really make you believe that these characters are the most powerful people on the planet. Well worth playing.