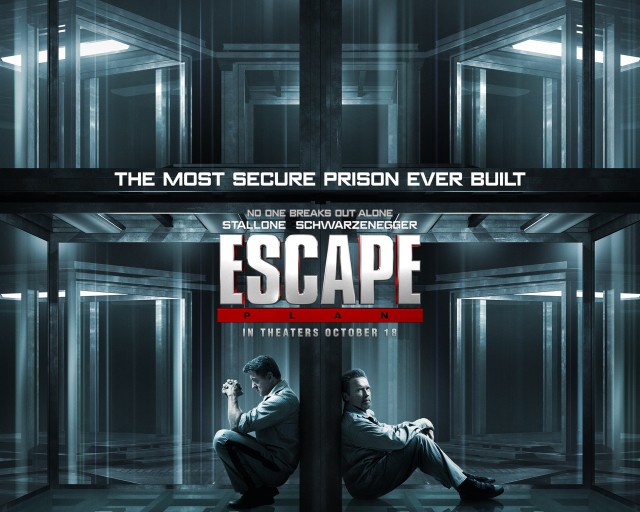 Sylvester Stallone and Arnold Schwarzenegger, teaming up again after The Expendables… Will this be a decent action adventure or will it be another struggle for these two to become relevant again?

The basic gist is that Stallone stars as a man who is an expert on breaking out of prisons but he ends up in prison that might be impossible for him to tackle alone. While in, he meets fellow inmate (Schwarzenegger) who helps him to formulate an escape plan. The eclectic supporting cast includes Jim Caviezel, 50 Cent, Sam Neill, Vincent D’Onofrio, Vinnie Jones (Juggernaut from X3: The Last Stand), and Amy Ryan (Holly Flax from The Office).

Stallone is decent but Schwarzenegger is probably the highlight. He’s funny and pulls off the character much more than Stallone. The jokes don’t always hit, but I blame it on the writing.

The idea for Escape Plan is interesting, though I’m sure there’s been movies like this before. It’s essentially a movie version of Prison Break, but the guys are like 30 years older. I enjoyed the details of this super-prison and it was fun to see the escape attempts come together. On some level though, it kind of felt like a middle-schooler’s script as they doodled a “super cool” prison in their notebook during math class. It doesn’t always make sense or adhere to basic science principles, but it’s definitely cool.

Jim Caviezel and his lacky Vinnie Jones both do a good job but Sam Neill is underused. 50 Cent was a weird casting choice for the technology guru of the movie.

Like I just said above, it’s an amateur script. Some details don’t make sense at all. The one-liners are ill executed and fall short of what we expect of Schwarzenegger especially. The action is really jumpy, probably because Stallone is a little too old for these fight scenes. It’s a fun idea but implementation is lacking.

Really… I can’t say much more.

This is a short review because my thoughts are pretty mediocre. The idea is cool, the writing is weak, and the actors do the best they can with the script. If you’re looking for pure escapism (pun intended), this is a solid choice. I’m not going to be thinking about this movie ever again though. It’s okay. When up against stellar films right now like Gravity (review here) or Captain Phillips (review here), Escape Plan just doesn’t make the cut.