Here’s the background. A buddy of mine (shoutout to Narek) recently bought me the Mass Effect Trilogy for PS3. I’ve got about 10 hours into the first one and I thought it might be interesting to summarize my thoughts. This is full of spoilers as this game has been out for a long time.

I knew very little about the franchise. However, I am head over heels with BioWare’s other big franchise right now, Dragon Age. So I understand the concept of choice, character selection, and mission structure. I also watched a friend of mine Daven play Mass Effect 2 for a few hours but I recall literally zero things that happened.

So first off… I had to create a character. One that I would carry with me across all three games. So of course I went with a bald badass look.

In terms of playstyle, I chose to be a Soldier, focusing only on guns. My character I imagined to be a hardened warrior that charges in and destroys everyone, not a strategist.

Luckily, Mass Effect plays similarly to a first-person shooter though the mechanics aren’t quite as solid as other FPS games. The sniper rifle is especially hard to control, as it zig-zags across the screen. So I specialized in shotguns. As soon as I could, I put incendiary upgrades on it, so my foes explode into fiery chunks. Pretty amazing.

Now, this game is all about choice. And right off the bat, I had to start making choices. I decided I was going to be ruthless. I fight whenever I get the chance and I always shoot first. I was originally teaming up with Wrex and Tali but poor little Tali didn’t have the stomach for my moral choices, so I swapped her out for Garrus, who’s a good soldier and goes along with whatever I say.

Who would ever choose the other human guy?

Some key choices I’ve made: I discovered the sentient plant, the Thorian, and I wiped the entire colony off the map. I could’ve gone the route of using nerve gas, but what’s the fun in that? And below, you’ll see what it turns its victims into… I can’t risk those things getting everywhere. I also confronted a long-extinct race called the Rachni. I had a choice what to do with the queen, when I found out that she was thoughtful and not the mindless beast I thought. I still doused her in acid, can’t risk it. My Commander Shepard doesn’t have a gray area, it’s all black and white with him.

Now, I’m spending some quality time doing side quests and exploring other planets. At first, I thought it was super cool that random missions would pop up like “Hey, we’ve got a search beacon here!” but it quickly escalated to overwhelming. I’ve got like 20 side quests now and I have a feeling they’re all relatively similar. I’ll try a handful and see.

Some of these missions drops you onto a new planet and you drive your rover Mako around. I personally think this is super fun, though I never engage the enemy in Mako, I just cruise right past (or over) them. Reminds me of the Warthog in Halo and how much fun I used to have riding around in it. 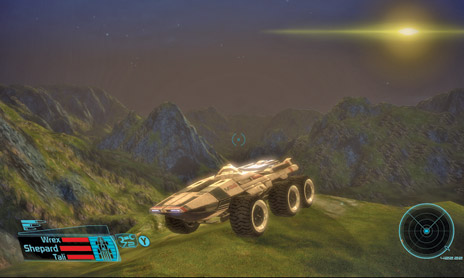 Other thoughts so far…

Since I didn’t choose any tech or bio abilities for myself, I don’t really get how they work. My AI buddies occasionally do some stuff but I try to encourage them to just charge in and shoot. Speaking of… the AI can be really bad for your partners. They often stand in the open and get gunned down while I’m charging from cover to cover. And giving them directions is really shallow and usually not helpful. Hopefully in 2 and 3, these get resolved.

Also, the autosave feature isn’t spectacular, as I often get killed during a boss fight and have to replay the level leading up to it (or a good chunk of it). I’m paranoid now so I save every 10 minutes, just in case.

So, I’ll be playing Mass Effect for the next few days likely and I’ll write another post when I complete it, and then more as I venture into 2 and 3.

Talk to you soon!