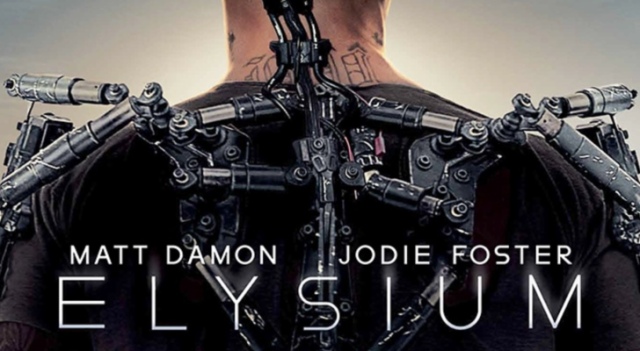 I was a fan of Neill Blomkamp’s District 9 and I was excited to see the spiritual successor, Elysium. This movie loses the alien factor though and relies purely on people’s intrigue with dystopian futures. Will this be able to stand above other genre films like Oblivion and After Earth that have already come out this summer?

Imagine a world riddled by crime and disease; so much so that the upper class creates a satellite called Elysium where they can all go live. They can cure all diseases, while the Earth becomes more and more diseased. Our story follows Max (Matt Damon), a former criminal trying to make a decent life for himself who finds himself in a situation where he must reach Elysium. Along the way, he becomes enhanced with an exoskeleton which gives him speed and strength. He accidentally crosses paths with a wealthy businessman (William Fichtner) who is on his way to see the Secretary of Defense (Jodie Foster). When Foster’s character realizes that Damon’s Max has ruined her plan, she activates sleeper agent Kruger to take him out.

Casting is on-point here. Damon is the perfect lead, able to be convincingly battle-ready, but also giving our antihero a dose of charisma and good-hearted nature, that we can actually root for him. Foster is perfect as the scheming Delacourt, along with Fichtner’s Carlyle. This was right up Fichtner’s alley so it’s nothing too unique for him, but he plays it well.

The show however belongs to Sharlto Copley, South African actor who made a name for himself in Blomkamp’s first film District 9. In a complete 180, Copley here stars as the merciless and psychopathic Kruger, who is an absolute terror to watch. You wouldn’t believe these are played by the same actor, it’s an incredible transformation on his part. Why isn’t he in more films?

The world looks very similar to District 9, stealing a lot of aesthetic cues. Rundown Los Angeles of the future looks eerily similar to the alien slums of South Africa. I think that’s why it’s easy to call this a spiritual successor. In that time though, the visual effects have definitely improved and Elysium is a gorgeous movie. Maybe gorgeous is the wrong word, since it’s so dark and horrifying, but technically it’s amazing visually.

There’s a few minor things that should have been caught much earlier on and it might be due to the fact that Blomkamp is still relatively a newcomer to the arena. The sound mixing was off in terms of volume. I caught myself a handful of times struggling to hear the dialogue over the booms of explosions. Unfortunately, some of these moments were key to the plot and I was left wondering why events happened the way they did.

On a similar note, both Copley and Wagner Moura (who plays a techie named Spider) were impossible to understand at different times. Part of it might have been the volume of the dialogue and some might have been their heavy accents. Either way, their lines were lost and plot points were missed entirely.

Elysium is fantastic. You can see the passion on Blomkamp’s part, as he created a rich and exciting world for us to watch for a few hours. He chose an amazing cast which didn’t disappoint, headlined by the chameleon Sharlto Copley. However, even though his concept was engaging and unique, his implementation was lacking and he missed a few errors that caused us (the audience) to be confused and potentially missing key pieces of plot information. A few more eyes on the project might have caught these errors, though these small gripes aren’t enough to really detract from the overall experience. Elysium is action-packed, emotionally-driven, and well worth seeing in theaters.