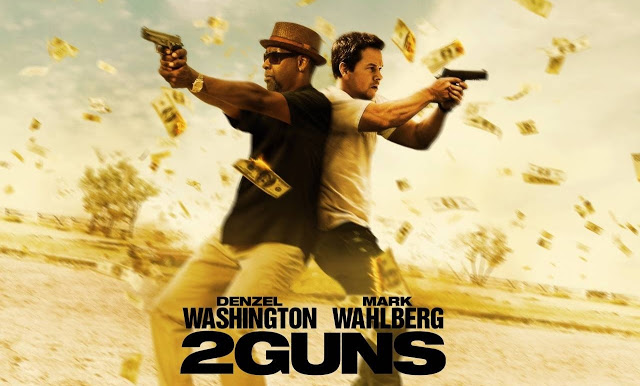 Denzel Washington and Mark Wahlberg are both amazing and rarely disappoint me. So when I saw the trailers for 2 Guns, I was excited. Of course, this isn’t a huge summer blockbuster and might fly under the radar for a lot of folks, but is it one you should check out this weekend?

Our movie opens with Washington and Wahlberg robbing a bank. Things get complicated as it turns out that neither of them are who they say they are, and the money didn’t belong to who they thought. This becomes a political intrigue film mixed with a few big action and fight scenes, though the “twists” in the film felt reminiscent of the earlier Mission: Impossible films, when you started to expect the twists to happen. Bill Paxton stars as the CIA head honcho who’s tracking them down, James Marsden as a Navy officer, and Edward James Olmos as an affluent Mexican cartel head.

Washington and Wahlberg are perfect, though it’s not a stretch for either of them. But that’s like complaining that Vince Vaughn is acting like himself. That is what we want. Wahlberg is a smartass and Washington is the clever witty one who chuckles before knocking a guy’s head against a wall. They’re both cookie cutters of every other character they’ve played, but it’s their chemistry that sells it. They’re amazing together and it’s their dynamics that keep you interested.

Olmos and Marsden are both incredible villains, but it’s really Bill Paxton who takes a really interesting turn here as the most despicable character in the film. Incredible work here.

The movie also nicely balances “mystery political suspense” with commonplace action. The fights are visceral and the car chases are amazing. It reminds me of other recent films Contraband (review here) and Snitch (review here), which I applauded for the same sort of action. Actually, in retrospect, director Baltasar Kormakur also did Contraband, so that makes sense.

While I appreciated the political aspect of the story and the mystery of why this is happening, it did become a little hard for me to follow. When you have like three government agencies, plus Mexican cartels, it can be easy to lose track of who wants what, especially in the final climax as it all comes to a head. In the end though, the action set pieces are amazing and distract you from any nagging questions.

While this won’t draw huge numbers, it’ll likely sit in the top 5 this weekend and deservedly so. It’s a great movie and features two stellar A-listers that clearly have a fun time with this film. Bill Paxton as the villain steals the show and the action pieces won’t disappoint, while the political plotline connecting those action scenes might confuse and disorient some viewers. Worth a watch. If not in theaters, definitely when it hits the shelves.