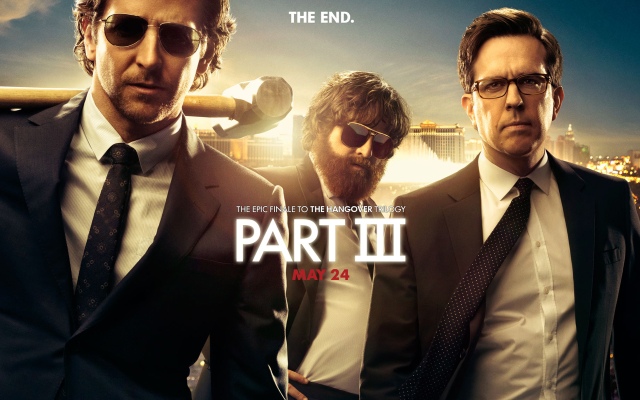 Here’s my track record of The Hangover movies: I thought number one was crude and over the top and then I thought The Hangover, Part II (review here) was just a worse copy of the original. So how does this third outing fare?

The gist is that Mr. Chow (Ken Jeong) has escaped from prison and has stolen a huge amount from Marshall (John Goodman). To find him, Marshall kidnaps Justin Bartha and forces Cooper, Helms, and Galifianakis to find Mr. Chow and return his money. There is no literal hangover this time, so it breaks free of the formula of the first two films, which is nice.

This movie still packs a punch of inappropriate shock value jokes but it does manage to dig a little deeper. Alan’s (Zach Galifianakis) story arc is actually interesting, though he starts off the movie as a complete jerk and it may alienate you a little. One of the opening scenes feature his father (Jeffrey Tambor) having a heart attack while Alan listens to his headphones. Throughout all the crude jokes, the throughline of Alan coping with his father’s death is kind of fascinating. The best scene in the movie was hands down an interaction between Alan and the baby from the first The Hangover. The baby is now a little kid and they have an interesting discussion about fathers and it allows for Alan to have a really sweet moment.

It might be my style of humor, but most of this movie missed the mark for me. I can appreciate R-rated humor but I rarely laughed during this movie. It’s a thousand times more enjoyable than The Hangover, Part II but still missed the mark on most accounts. I enjoyed bits, but it didn’t have me laughing hardly ever.

Helms was decent and relateable but it still felt like Cooper wasn’t even trying. His reactions to events were sometimes entertaining but I felt like a wooden stand-in could’ve done the same job. Knowing what Cooper is capable of, it’s a shame that he’s not passionate about this.

Ken Jeong has a larger part to play in this film but it’s completely unrealistic and a detraction from the story. Take it down a notch and find the humor in realism instead of creating an unrealistic story which can alienate viewers.

I’m not a fan of the series but this film had more redeeming qualities than The Hangover, Part II and I admire they tried a new formula and gave a little depth, though most of the comedy bits still missed the mark. If you loved the other entries, you might still enjoy this. Not my cup of tea though.

1 Response to Review: The Hangover III