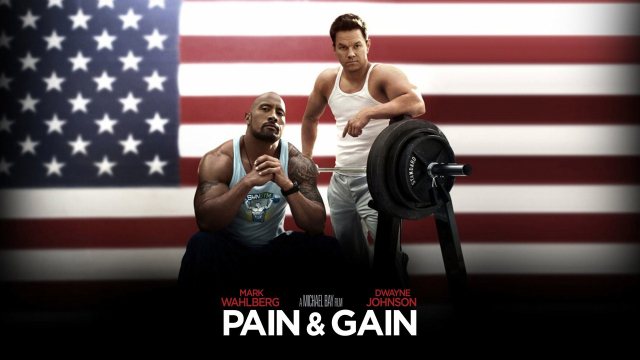 I don’t know why this took me so long to see, as it’s been out probably a month at this point. I’m a huge fan of Dwayne Johnson and I was curious if Michael Bay was getting back to his roots, with this Miami-set heist movie.

The gist is that Daniel Lugo (Mark Wahlberg) works at a gym and, even though he’s ripped, he’s found that his life is mostly empty. He meets a greedy millionaire (Tony Shalhoub) and hatches a plot to steal everything he owns. He ropes in his buddy Adrian (Anthony Mackie) and new guy in town Paul (Dwayne Johnson) and they set off to steal his land, money, and assets. However, things go horribly wrong. As they usually do. This is based on a true story, though likely embellished for the big screen.

Our three leads are outstanding together. Wahlberg is the best I’ve seen him in a while, perfectly playing the over-confident and impulsive Daniel Lugo. Anthony Mackie balances this confidence, as he’s constantly doubting their actions and tries to overcompensate for his self-esteem with anger. Dwayne “The Rock” Johnson rounds out this trio as the most interesting character in the movie, as a former cocaine-addict and born-again Christian. His mantra of living peacefully and trying to change his ways slowly crumbles away as the movie progresses, giving him the most interesting character arc in the film. They’re all three interesting to watch, especially together.

A smart move was to actually allow all the characters in the film narrate portions. So when we’re introduced to different characters, they tell us their story via flashbacks and narration, allowing us to see further into their motivations. It also made for compelling filmmaking visually.

Tony Shalhoub is also perfect as the villain/victim in this story. Even though he’s the victim of some heinous crimes, he makes it nearly impossible to like him, which makes him a great antagonist. This whole movie is about shades of gray and he nails this balance.

Visually, Michael Bay feels at home here. He’s done Miami before but he manages to capture it perfectly again here. The action scenes are dynamic and the 1990s soundtrack is strangely both comforting and ominous. The fight scenes here are gritty and visceral, leaving behind his flash and dazzle style of action we’ve seen lately from him, where action scenes are a blur. Here, you feel it as Dwayne Johnson throws someone through a window. It’s slow and lingering and perfect. Even the use of slow motion in these scenes is a unique but welcome addition to his repertoire.

Other standouts in the supporting cast include Rob Corddry as the owner of the gym that Daniel Lugo works out and Rebel Wilson as Anthony Mackie’s love interest.

I could see people being turned away by this film’s visceral nature and I’ve heard comments that it made people “feel unclean” afterwards, but I feel like this is all intentional on Bay’s part. But it might be a divisive film among critics.

I enjoyed every moment of this film. It is likely one of Dwayne Johnson’s best movies to date, combining his badass antics of films like Fast Five but also giving him some emotional arcs to work through. Stylistically, the visuals were both colorful and gritty and worked well with the 1990s soundtrack. There were a few jaw-dropping moments as well as laugh out loud moments of humor and they worked perfectly together. I whole-heartedly recommend this movie.

2 Responses to Review: Pain and Gain