Steve Carell takes a turn as ridiculous Vegas magician Burt Wonderstone in this late Winter release. The gist is that Carell has made a name for himself in Vegas, alongside his partner Anton (played by Steve Buscemi), but his appeal is starting to wane, as newcomer Steve Gray (Jim Carrey) starts to attract the younger audiences. Can old-school magic hold its own against this new style of street magic? Olivia Wilde stars as Wonderstone’s assistant and Alan Arkin stars as the magician that inspired Wonderstone when he was a kid to take up magic, Rance Holloway.

There is plenty of material here, as both flamboyant Vegas-style magic and the new era of street magic both offer up plenty of source material. The highlight of the film for me was definitely Jim Carrey’s Steve Gray, the epitome of this raw and physically demanding style of magic that has become popular with acts like Criss Angel and David Blaine. Carrey completely inhabits the role and gives his 110%. It provides a daunting challenge for our “heroes” but Carrey is up to the task. As he accumulates scars and bandages throughout the movie, you can feel how his initial nonchalance becomes obsession, culminating with an epic magic-off at a child’s birthday party, one of the highlights of the movie. 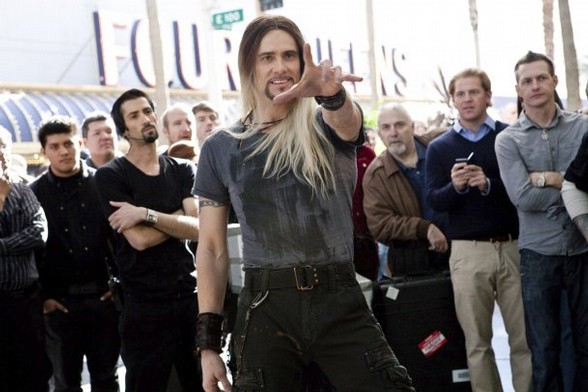 I think it’s because of Carrey’s absolute dedication that we’re able to relate to the opposing Carell’s Wonderstone at all. He’s not an especially likeable character, so in relation to Steve Gray, we can actually see Wonderstone as the hero of the story. For a good chunk, I didn’t, but Steve Gray gave this film the perfect antagonist to make sure we’d root for Wonderstone in the end. So kudos to Carrey.

The supporting cast was rounded out perfectly, from a decently-likeable Olivia Wilde to an always-great Alan Arkin to even a hilariously perfect (although underused) Jay Mohr as “Rick the Implausible.”

Partly due to the script and partly due to the performance, as I mentioned above, it was difficult for me to see Burt Wonderstone as the hero in his own story. He was made so diabolically unlikeable that we barely were able to get to that point by the end of the movie. I could root for anyone else, especially his neglected sidekick or underutilized stage assistant, but not Burt. Carell played Wonderstone as such a dramatic diva and diabolicial misogynist that it was a major hurdle to make him our hero. And Carell didn’t stretch any acting muscles we haven’t seen before. A lot of this character came from The Office, though amped up to another degree. That same sense of being completely unaware is trademark Michael Scott.

I can’t help but wonder if this part might’ve been better suited for someone more easily able to hop into a character piece like this, such as Ben Stiller. Stiller did a turn on Arrested Development that would likely convince you that this movie would been a completely different (and probably better) endeavor that we got with Carell.

In terms of story, we also have a pretty unoriginal and predictable tale, though the source allows for some clever moments, but we know from the beginning where the story will end up.

The Incredible Burt Wonderstone is a decent movie. It’s funny, though predictable. While Carell flounders, Carrey manages to make him look likeable, which is key. And mostly, it works. In the end, I enjoyed the movie though I wouldn’t say it was great. I would categorize this with other movies like Drillbit Taylor or The Watch that are decent enough but aren’t going to stand the test of time alongside greats like Zoolander or Wedding Crashers. I’d recommend waiting to rent it.