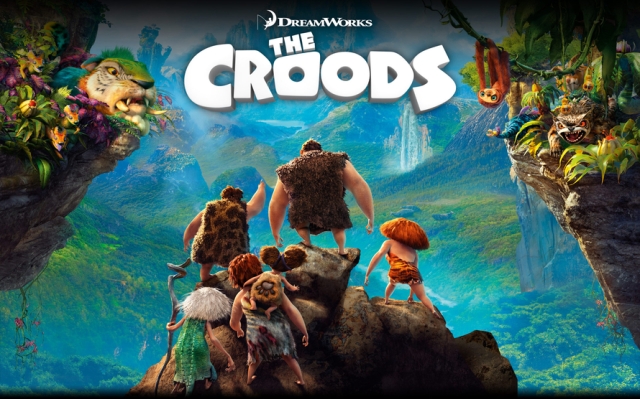 It’s no secret that I’m a huge Dreamworks Animation fan. Both Kung Fu Panda and How to Train Your Dragon are consistently in my favorite films of all time. So I looked forward to this outing but the trailers didn’t impress me much. So what’s the verdict?

The gist. We have a family of cavemen who live in relative isolation. The father (voiced by Nicolas Cage) doesn’t let them go far and warns them that anything new or different will kill them. Well, eventually, a major earthquake forces them to explore a whole new world. Other notable voices include Emma Stone, Cloris Leachman, and Ryan Reynolds as the next stage of evolution, who helps these cavepeople to think outside the box.

The animation is pretty unique, which is part of my initial hesitation. None of these characters are especially nice to look at, nonetheless watch for two hours. However, the world that they inhabit is gorgeous. This movie is going to astound you on BluRay, no doubt. The creatures that live in the world are also very unique, as they often blend two creatures together, such as an owl and a cat or an elephant and a mouse. It’s almost a Suess-like environment but it works. The colors are very vivid as well, resembling the world of Pandora from Avatar.

The voices are relatively well-done, though they all sound exactly like their actors. When Nicolas Cage speaks, it sounds exactly like Nicolas Cage. Not ideal for a movie like this, but it works in the case here. Cage pulls it off, as does Emma Stone and Ryan Reynolds, all who have easily identifiable voices. It works.

And then there’s the story. I have high expectations of Dreamworks Animation, so did this one manage to pull it off? Yes. While it started out a little corny, it ended on a high note. I was tearing up for the last 15 minutes of the movie, I was so invested. It was riveting, engaging, and appealed to kids and adults alike. If you’re initially put off by the physical antics and slapstick humor, just wait. Eventually, the story gets a little deeper and it’s incredibly rewarding.

Some of the humor was a little too much for me, much more aimed at children than films like How to Train Your Dragon or Kung Fu Panda. That alienated me a little bit, though I understand the decision.

Also (in another movie to reach out to the kids) there is a crazy amount of humanized animals in this movie. It begins with a sloth named Belt that is cute enough but it gets crazy by the end, there is a whole gang of animals that act like people and even make pop-culture references. Even for this crazy world, it was a little alienating.

The Croods is a great film. Funny, emotionally engaging, and somewhat unpredictable. However, it can’t hold a candle to Dreamworks’ other entries into this genre. And this film especially feels like it’s dumbed down for kids. The visual effects are outstanding however and for that reason alone, this is worth a trip to the theatres. I saw it in 2D so I can’t speak to the 3D version but I could imagine it being pretty epic. So… go see it. But know that it won’t be your new favorite Dreamworks movie.

2 Responses to Review: The Croods